We placed the release version of ADE9X version 1.45 on the download center this evening UK time. The official release date is Sunday 30th August 2009 and Martin (gsnde) our Release Manager will be rolling the announcements out over the next day.

I want to publicly place on record my thanks to the whole team and also to y'all here on FSDeveloper for your help and support in getting ADE to where it is today.

Thank you very much to you and all the equipment that works for us and the simulator process of improvement of flight simulator.

ADE is a beautiful product, of very easy use and with a curve of impressive learning.

Congrats for getting it out!!!! Sorry I've been away for the last 5 weeks (for various reasons once I get to the US mainland I try to get many things done before going back home) and couldn't do much testing/feedback. I did have a default install of FS9 and some of my old projects files while on the road and did play with the betas (I have to share my wife's laptop when we travel, so you know how that goes).

Congratulations and thousands of thanks!
B

hi Jon and the complete ADE-team,
Congratulations with this release and thanks again for all the work done.

Many thanks again, Jon!

As it seems to me, start-up and loading an airport became a lot faster. That' s a significant step forward. Congrats - also to the team!

A much-anticipated release, and a huge step forward for FS9 airport design. Congratulations and many thanks to the team!

1000 of Kisses the ADE Team.
Your work is brilliant.

Because of an immediate interest in fixing a problem with MT84 (Kalispel, Montana, USA), I installed the release version of ADE9X.

Having used AFCAD since - well the day it was released - I had no problems with the basic GUI, and the manual is simply brilliant!

ADE9X installed without any issues and is working just fine! It adds SO much more capability beyond what Lee's program does, and even more the point it actually produces a usable .bgl at MT84 that AFCAD simply could not...

...I can actually see a runway now, whereas AFCAD's changes could not be seen...

However, I was somewhat disappointed that the one thing I actually need to do at the moment only works for FSX...

Since I'm engaged full-time in aircraft and gauge/system development, I've very little time to indulge myself, but I'm going to see if there's some way to "fix this one airport" while I'm in the area...

In any case, let me thank everyone involved with ADE on a job very well done! I'll not be deleting AFCAD anytime soon simply because of one feature that few folks know about: the ability to change the radius of any aircraft for FS9 models that because of hidden "features" often have default camera radius that's rediculously too far distant!

n4gix said:
...the ability to change the radius of any aircraft for FS9 models
Click to expand...

This you could alternatively do with AI-Aircraft Editor, Bill

gsnde said:
This you could alternatively do with AI-Aircraft Editor, Bill
Click to expand...

Well, truthfully it's easy enough with Visual Studio's Hex editor when it comes right down to it...

I'm about to give up. I've spent (wasted) several hours trying to find a way to create a simple "flatten" for the FS9 MT84 airport...

To change the altitude of a default airport, you can use that feature in the ADE Tools menu. It will place a special file in the Scenery/World/scenery folder that will force FS to accept the altitude change (it doesn't, normally).

In AFCAD days I just placed a copy of the changed AFCAD file into that folder, and it worked fine too.

This does not create the actual flatten file, though.

To create an FS9 flatten file I normally use SceneGenX, but that's probably overkill for just one airport. You could use FSTFlatten instead, which is probably easier to learn.

I've created a quick flatten file, if you want to try it.

Use the Change Airport Altitude function in the ADE Tools menu to change it to 3100 ft. After that and compiling the airport it looks fine.

n4gix said:
I'm about to give up. I've spent (wasted) several hours trying to find a way to create a simple "flatten" for the FS9 MT84 airport...
Click to expand...

n4gix said:
Well, truthfully it's easy enough with Visual Studio's Hex editor when it comes right down to it...

I'm about to give up. I've spent (wasted) several hours trying to find a way to create a simple "flatten" for the FS9 MT84 airport...
Click to expand...

Don't give up too soon. We at ADE wanted to release the ADE9X with the ability to be able to work with all the existing AFCAD bgl's already in existance. One of our main goals for the ADE9 version was to take all of Lee's original goals and push ADE9 to what Lee had invisioned that AFCAD would have done if it had been completed. You will notice that most of the ADE original team is made up of all the same guys from the old PAI AFCAD forum that worked with Lee on both AFCAD and TTools. Some of us still have his original design goals in post forum which if I remember you also were a part of back then.

You will also see in both ADEX and ADE9 the never before seen Approach code interface (button in the top right corner of the ADE menu bar) that uses the ARINC 424 document as a ADE GPS Reciever. Jon was able to code writing approaches on the fly so the line draw as seen in ADE will be what is seen in the GPS. This very complex coding also error checks the draw of the approach/transitions that can be written against the ARINC 424 document that MS used as the foundation for all approaches.

We do plan to push ADE9 even further with the ability to work the ground of the airport (flattens and VTP exclusion/polys) possibly in the next major version release.

tgibson said:
Use the Change Airport Altitude function in the ADE Tools menu to change it to 3100 ft. After that and compiling the airport it looks fine.
Click to expand...

I'm having a problem with ADE9X. The mouse pointer often defaults autromatically to the 4-arrow 'move', and trying to move the mouse causes the airport to move out of sight.

I can't find any obvious way to revert to the default arrow; clicking on the 'Pointer' icon doesn't help.

The airport is indeed supposed to be 4000 ft, but the surrounding valley in FS9 default mesh is at 3100 ft. If you go there, you will see an airport sitting on top of a 900 ft mesa (flat topped mountain), with incredibly steep sides. There would be no way to get from the airport to town!

My choice was to create a flatten file at 3100 ft for the airport, and use the Tools/Change Aircraft Altitude command in ADE to move the airport down to the valley. The other choice would be to raise the valley up to 4000 ft, but then you will start interfering with the other (the main) airport in the valley on the other side of town. That's Flathead County airport (KFCA), at 2977 ft elevation.

Oh dear! I think I've not made myself clear at all in this instance...

What I (was) about to give up was the single goal of flattening MT84...

I've absolutely no intention of giving up on ADE, which in my humble and throughly inadequate opinion is the greatest thing since sliced-bread!!!

tgibson said:
To create an FS9 flatten file I normally use SceneGenX, but that's probably overkill for just one airport. You could use FSTFlatten instead, which is probably easier to learn.

I've created a quick flatten file, if you want to try it.

Use the Change Airport Altitude function in the ADE Tools menu to change it to 3100 ft. After that and compiling the airport it looks fine.

The problem I encountered was that the actual airport was then inside the mesa, because I couldn't seem to create a "flatten" that would work.

I discovered that trying to use a flatten.0=xxxx in the scenery.cfg does not seem to work (or at least I never managed to flatten more than the NE corner of the mesa, despite having created a flatten rectangle that was more than 4x what was actually needed.

I found what was undoubtedly a neat tool at one time called "FlattEx.exe" that can grab the coordinates directly from FS9 and create a proper flatten.n=xxx,xxx etc. line for use in the scenery.cfg file. I also learned that one should never, ever alter the template copy of scenery.cfg in FS9's root folder if one is running Vista...

A google search revealed that a fellow had created a set of files specifically for MT84 (cleverly named mt84fix.zip), which while indeed flattening the mesa, left behind an oddly shaped grassy rwny, but with a wierd, offset dotted white line that extended past both ends of the 2,000'x25' strip.

I also had a chance to look at SBuilderFS9, which while undoubtedly a wonderful bit of programming, is far too complicated just to learn how to accomplish such a pedestrian goal as mine... a simple flatten!

In any event, it's been a terrific learning experience. Thanks for the "flatten," Tom. With that and ADE I've managed to accomplish my modest goal(s). I changed the surface to "Bituminous" and added a small bituminous apron and a three bay hanger. Here is the result: 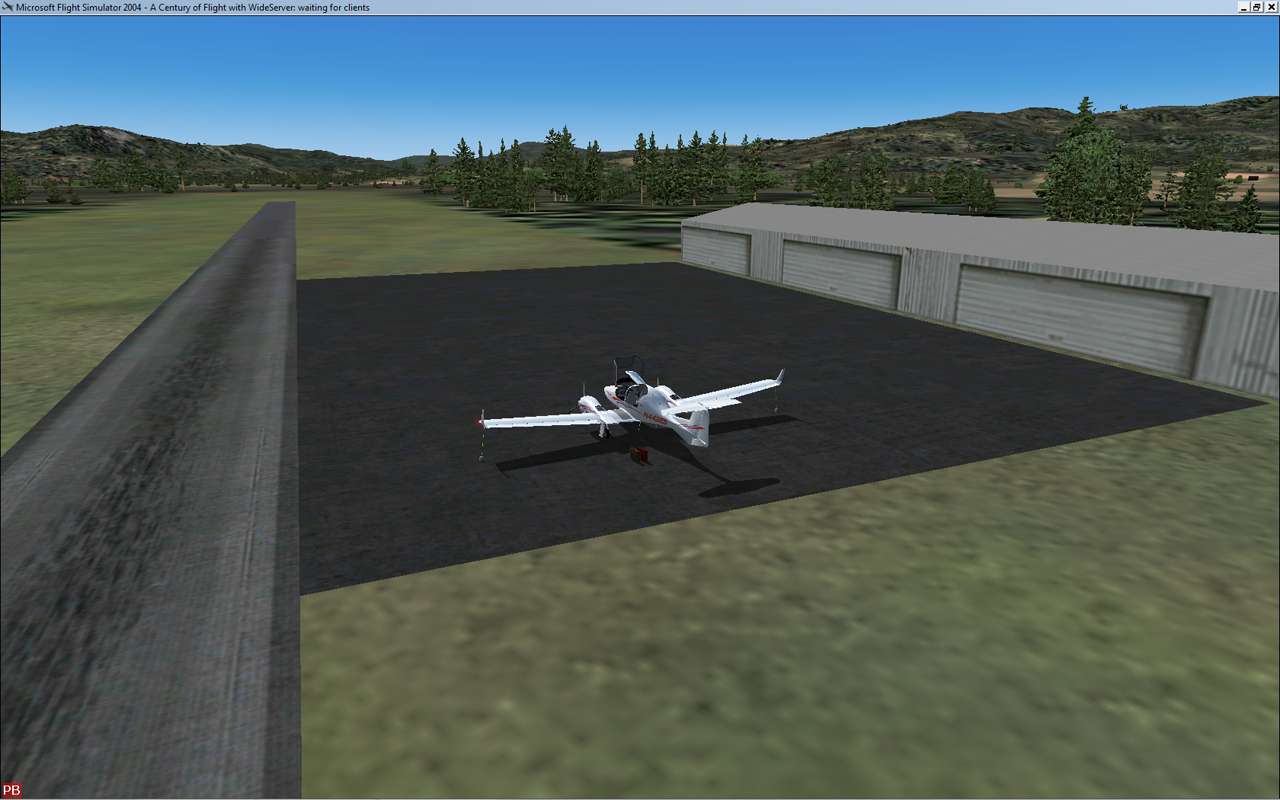