I am trying to do something perhaps a little unconventional, but first, the background and reason...

I fly with FSEconomy (FSE) for those familiar with the website. For those not, it emulates a "Mom and Pop" type charter financial operation where you carrying passengers and cargo, purchase company aircraft, and build Fixed Base Operations. That said, I purchased a Grumman Turbo Goose in FSE. Each aircraft has a "fixed" set of parameters that your personal flight simulator version must match. These include, among others, fuel type, passenger and cargo capacity, operating weight, fuel consumption in gallons per hour, cruise airspeed, and fuel tank configuration and quantities.

I have the Grumman G21A HP Oz Redux in my fleet of aircraft and it does not match the FSE specs, obviously, for a Grumman Turbo Goose, so I am trying to make it match by altering the aircraft.cfg file. As I see it, beyond the basic operating weight...easily changed...and fuel tank quantities...also easily changed ( I have adjusted the pitch, yaw, and roll MOIs to allow for the changed weights), and setting fuel type from 100LL to JetA my issues are with getting fuel consumption and speed to points that come closer to the Grumman Turbo values. if I don't, any flights I do with it will be discarded by the FSE Pilot Client.

Fuel consumption I think I can handle. I have done this with several aircraft I use in FSE and it has been just a matter of adjusting the fuel_flow_scalar in [General_Engine_Data] until I get a consumption that FSE expects to see during a flight.

Getting the speed difference has been another matter. I am trying to use just power_scalar in the [Piston_Engine] section and thrust_scalar in [propellor] section. The real Grumman Turbo Goose has turbine engines that use JetA fuel as opposed to the original G21A that has piston engines that burn 100LL. I tired to convert it to a turbine engine aircraft by removing the [Piston_Engine] section and replacing it with a [turbine_engine] section from a comparable turbine engined amphib. Also added a [turbine_engine_data] section. This effort resulted in propellers disappearing, although the aircraft itself "started" and flew just fine. Still, the visuals of a missing set of props was not appealing to me. So, I put the original engine data back in and removed the turbine engine sections and I am now trying to make adjustments within those two sections to get the "Goose" to a 200 knot cruise, but not really having much luck trying to make a piston engined aircraft with prop rpm levers and mixture levers think it is turbine powered. I can get it to 200 knots but prop rpm goes well above the prop rpm limit in doing so and reducing the prop rpm lever to 0% does not change the setting rpm value one bit. The SDK really doesn't explain much about the power_scalar and thrust_scalar parameters.

I know I am trying to do what was not intended within the SDK and the parameters, but after fruitlessly searching for an FSX version similar to the xPlane DDenn's version of the Turbo Goose I have no where else to go. The Grumman G21A has a hp rating of 600 per engine, burns 100LL, fuel consumption of 50 gallons per hour, two fuel tanks at 170 gallons each, and a cruise speed of 170. The Turbo is 680 HP per engine, burns JetA, fuel consumption of 100 gallons per hour, two tanks at 211 gallons each, and a cruise speed of 200 knots. All I am trying to reach is the 200 knot figure using piston engine data sections without overmaxing the propellor rpm. Engine failure is not modeled that I know of in the Oz Redux, but the rpm limit is something like 2850. I have had it well above redline (3600 rpm) for an hour or more at 200 knots. I could fly it like that in FSE (I have and the PIREP was accepted so the aircraft is useable as is), but I just don't like the "image" of that knowing in real life the engine would have seized or come apart long ago.

Just trying to make something that "shouldn't be" look like it "should be".

Resource contributor
Wouldn't it be MUCH easier to ask the FSE admins to add that particular model to the aircraft whitelist?


P.S: The very strict handling of aircraft parameters is one of the many reasons why I never manaed to warm up to FSE.
R

Thanks for the response and I tend to agree with you about FSE parameter handling, especially since the entire "world" is based on the FS2004 platform and airfields.

However, your first suggestion won't work. FSE already has a Grumman G21A with the correct parameters and a Grumman G21G (the Turbo version of the Goose) also with correct parameters. Since I am trying to force a G21A to "act" like a G21G there is no aircraft to add to the whitelist of acceptable aircraft models. I cannot fly the Ozx Redux Goose as a Turbo version as is, the parameters won't match. I can fly it...and have done so many times in the past...as the correct G21A. In sim performance is almost spot on with the FSE parameters.

Making the sim think an "A" is a "G" is my issue. if I can manage that then the FSE Client will also assume it is a "G" and allow the flight. It's all about the title line, the fuel quantities, the speed, and the fuel burn. Get those four to match or get close to the FSE Aircraft Model Specs and you can fly the C172 as a Dash 8 Q400. I have the freemium CLS Piper Arrow for FSX and with some "crafty" config changes can fly it in FSE as a Dakota, Archer, Comanche, and a host of other Piper GAs.

Thanks again. I do value and appreciate your input. You've been very helpful in the past.

Resource contributor
Hey Randy,
you could try to change the flight model to the turboprop one instead of the turbine version. If you do, make sure to switch the .air file as well. No clue how the model and panel will work with this though. But at least you should have your spinning prop again.

Resource contributor
If you want to turn a piston powered airplane into a turboprop airplane, you need to change both aircraft.cfg and the airfile.
One way to do this is to compare the stock Beech Baron with the stock Beech King Air.
With both aircraft.cfg files open, Baron on left King Air on right
Go straight to [GeneralEngineData]
Change engine type to 5
Delete all of [piston_engine] on left and replace with [TurbineEngineData] from right
Add [turboprop_engine] section from right to left
In [fuel] change fuel_type to 2
In each [fltsim.x] section add_turbo to sim=Beech_Baron_58 so it is sim=Beech_Baron_58_turbo.
Save aircraft.cfg
Rename beech_baron_58.air to OLDbeech_baron_58.air
Copy the beech_king_air_350.air file and paste into the baron folder
Rename the beech_king_air_350.air file as beech_baron_58_turbo.air

That would give you a pretty hot Baron which you could then fine tune in the [turboprop_engine] section
Similarly you could modify your Goose in the appropriate sections.
Your mixture controls will become the condition levers, fully back will act as a fuel cock. the RPM levers can be left at fully fine (forward) because the constant speed mechanism will keep the props at 100% N2 most of the time.
I do not recommend doing anything to the air file unless you are very familiar with what happens there.
Roy
Last edited: 26 Sep 2018
R

Came back to this late, my apologies. I had seen Vitus' post...thank you for that sir...but really didn't want to dive in to the whole airfile thing.

However, having read your post, Roy, what you describe is very similar to making a Posky B767 think it is a LevelD B767, which I did several years ago to have a -300 version factory and a modded -200 and -400 version using Posky's models. Worked very well.

I have tinkered with the default OzX config and gotten "close" to Turbo performance without touching the airfile. BMEP stays up around 38 inches, but still in the yellow, however RPMs run well past redline (2850 RPM) at 3800 RPM. Fuel flow is 104 gallons per hour, just what FSE expects, and cruise speed in in the high 180's/low 190's (knots, not MPH) at 8,000 feet.

However, after reading your post I believe I will save the config as is and then see what swapping/renaming airfiles and and changing piston data to turnbine data config entries will get me. I do have a Turbo Mallard very similar in design to the Goose with all the appropriate turbine entries and a "turbo" airfile already. Really hadn't thought of doing that type mod, but makes perfect sense. I will definitely stay out of the airfile guts though. I've read about it and what it does, but never tinkered and now is not the time.

Thanks again to all who have responded. I will post my results. One person at the FSE Forums already commented on the big round engines in my "Turbo" screenshot I posted. Wish I had the modeling skills to at least make them "look" sleek.

I am pleased to report that following Roy's suggestion I have a very realistically performing...at least I think so...Grumman Turbo Goose for FSX using the amazing OzX Redux and a few easy modifications following his tips. 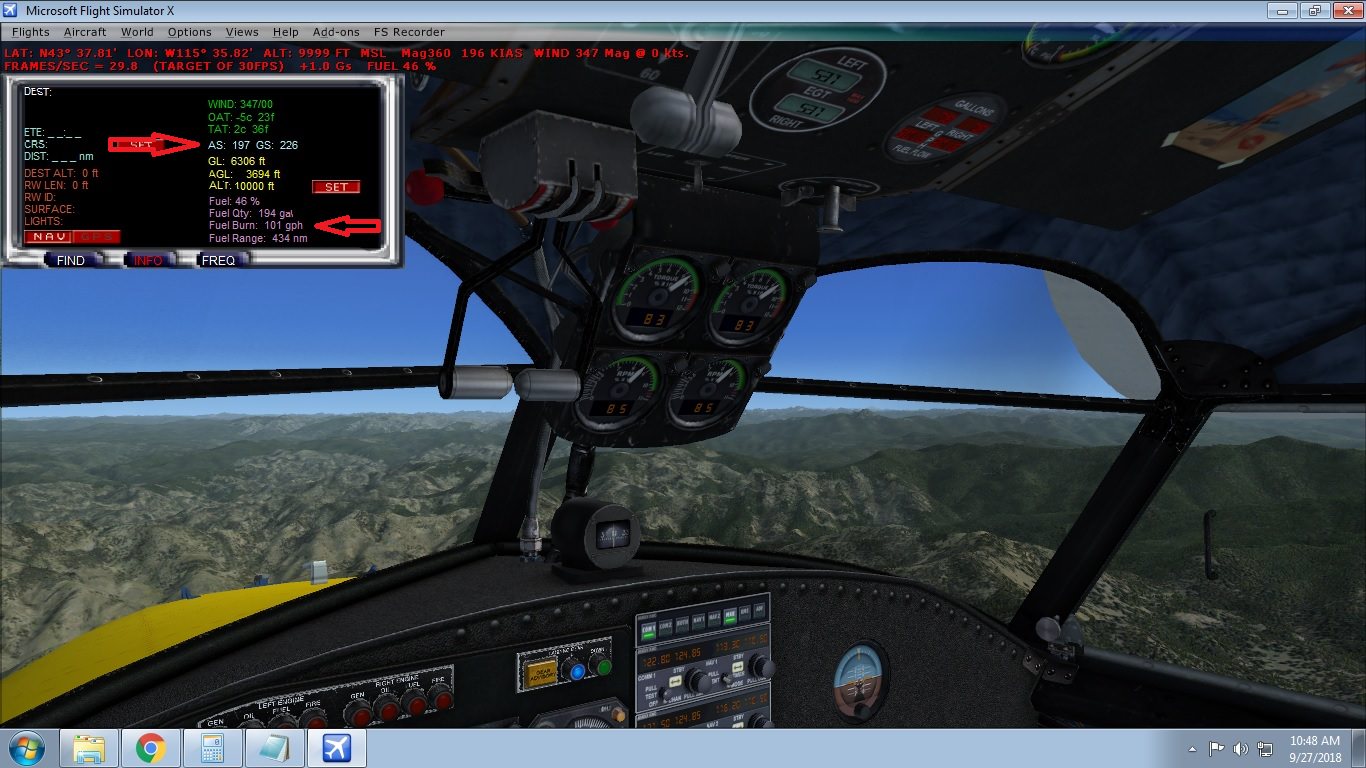 You can see I am at 101 gallons per hour fuel burn and an IAS of 197 knots, both very, very close to what FSE expects to see when one flies the G21G. I swapped out the BMEP and Radial RPM gauges for some turboprop Torque and RPM gauges and getting very good readings. Made a few very minor changes within the [propellor] and [general_engine_data] sections, leaving the [turbprop_engine] and [TurbineEngineData] sections I moved from the TP Mallard alone.

I'm happy in every respect except the outside appearance of the big radials instead of the sleek 680 hp PT6A-34 turboprop engines, but from the cockpit I can see blades spinning and that's all that matters. Using the renamed air file gives me a very close to authentic turbine engine startup sequence and I used the Mallard's sound file so from the inside she even sounds like what I feel the Turbo Goose would sound like in real life. As I said, all in all, a very happy simmer...

Thanks Roy and Vitus and Herectic and eveyone else who contributed. To each of you my sincere appreciation.