After the now finished "Birds Air Route" I have chosen the port of Hamburg for the year 2019 on multiple request.

Since the performance over Hamburg in the P3D isn't the best anyway, I can't say yet with certainty what the final scope of the project will be.
It is clear that it will of course include the new harbour promenade with the Überseebrücke (Oversea Bridge), the Landungsbrücken (Landing bridges), the floating docks, etc. If possible I will continue the harbour mile to the museum harbour "Ovelgönne".

Everything else like the theatres "King of the Lions" and "Miracle of Bern" as well as the whole area on the south bank of the river Elbe will depend on the performance situation until then.

I can already present a first picture to you:

The harbour promenade itself is already finished in its new form with the 8 wide panoramic stairs (still under construction in reality). The grey block with the transparent roof (front right) becomes the subway station "Baumwall" and the black area in the background at the end of the promenade becomes the landing bridges (2nd construction phase).

After the station Baumwall the "Oversea Bridge" with the berth of the Cap San Diego and the marina will be built. Then the first construction phase is finished.

You can follow the further progress of the development in the German and in the English sector in the new SimDocks forum. 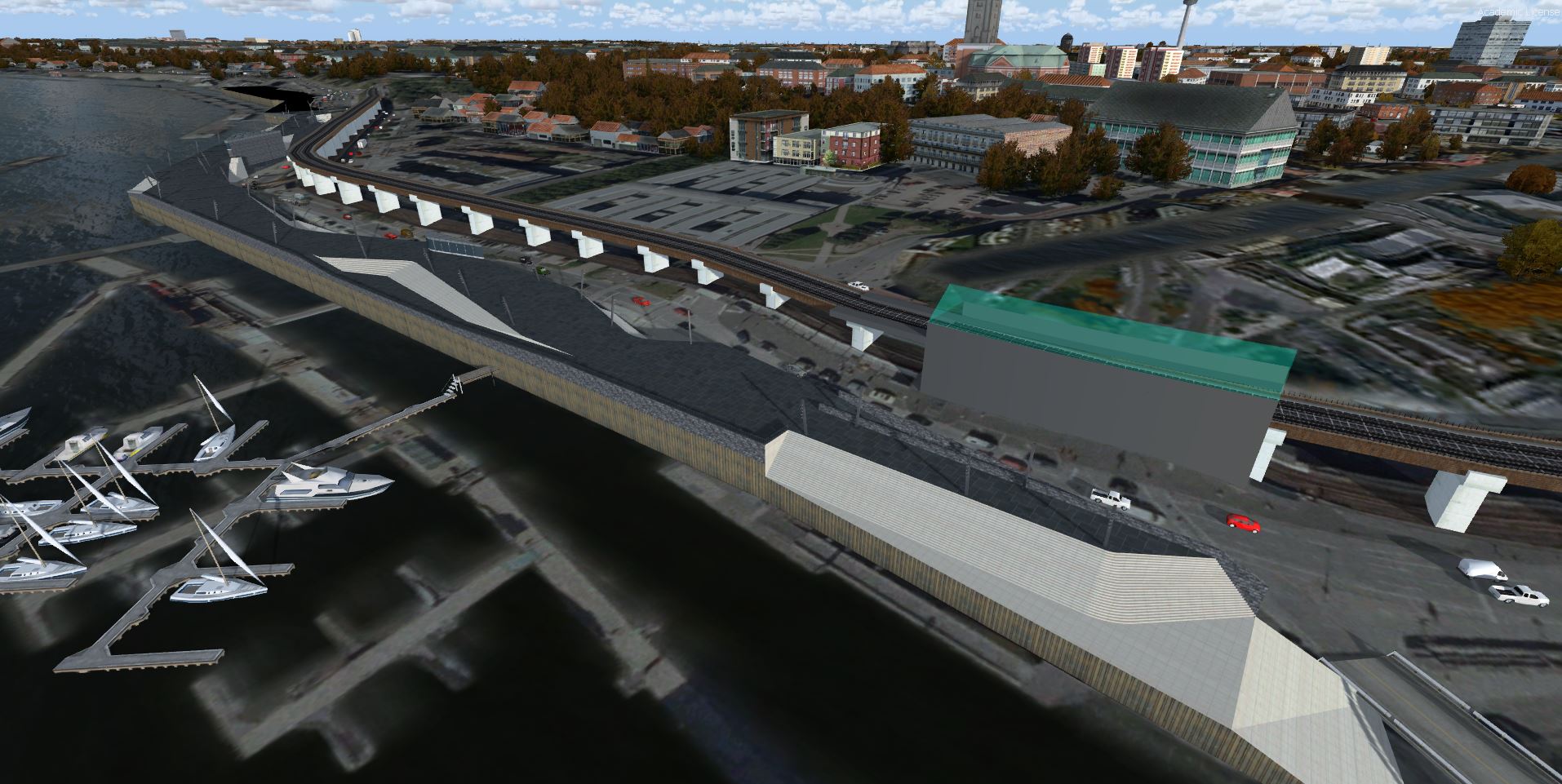 ....and here the promenade at night: 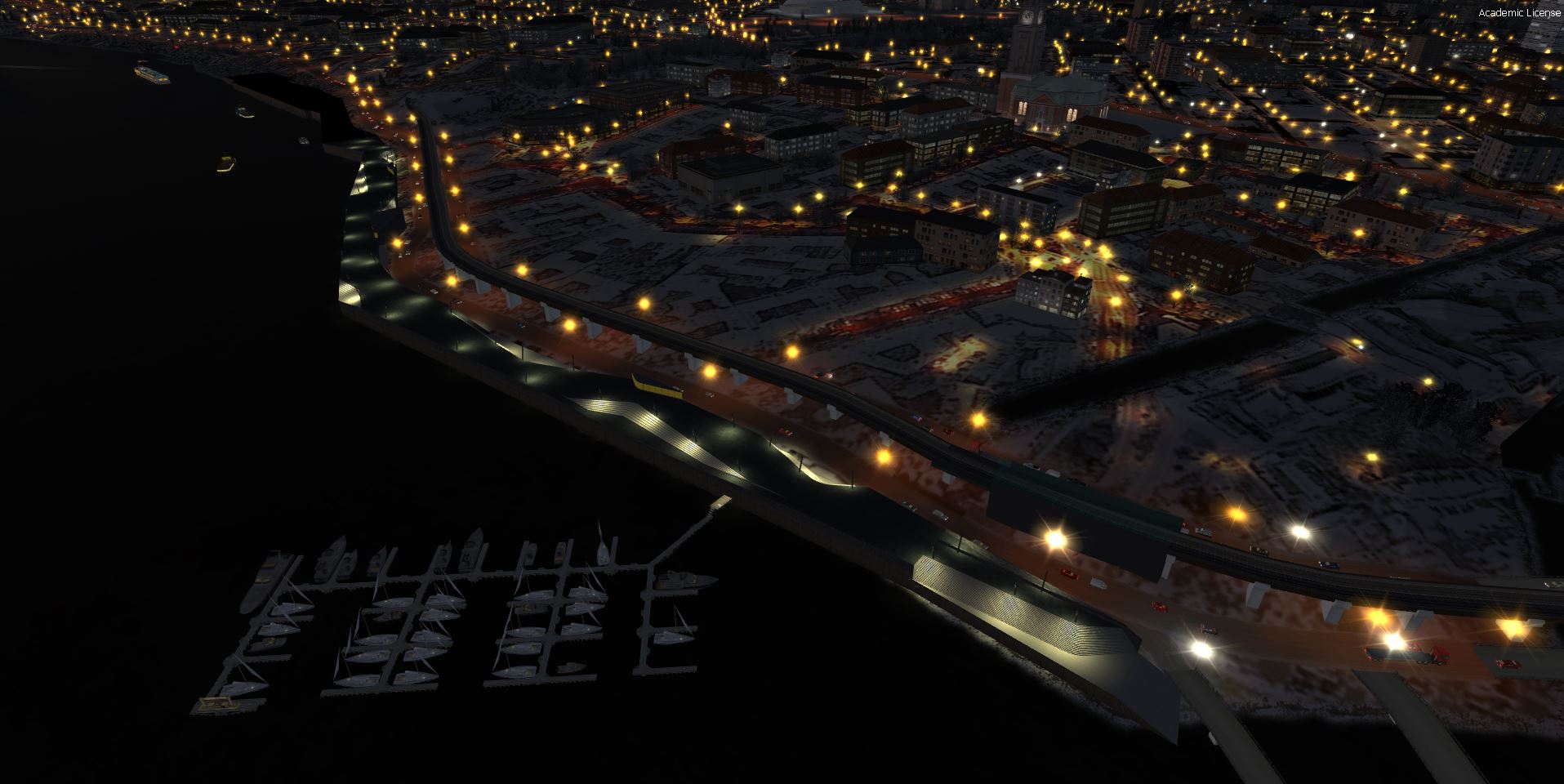 I think this will be a very good project as I'm also flying regularly to/from Hamburg in P3D V4 with ORBX. The performance there is quiet bad and the autogen around the harbor looks very unrealistic... I'm excited and keep the work up!

Here are the latest advances in the development of the Port of Hamburg. In the meantime the subway station "Baumwall" is finished and also in the area of the marina something has already happened. Here are some pictures: 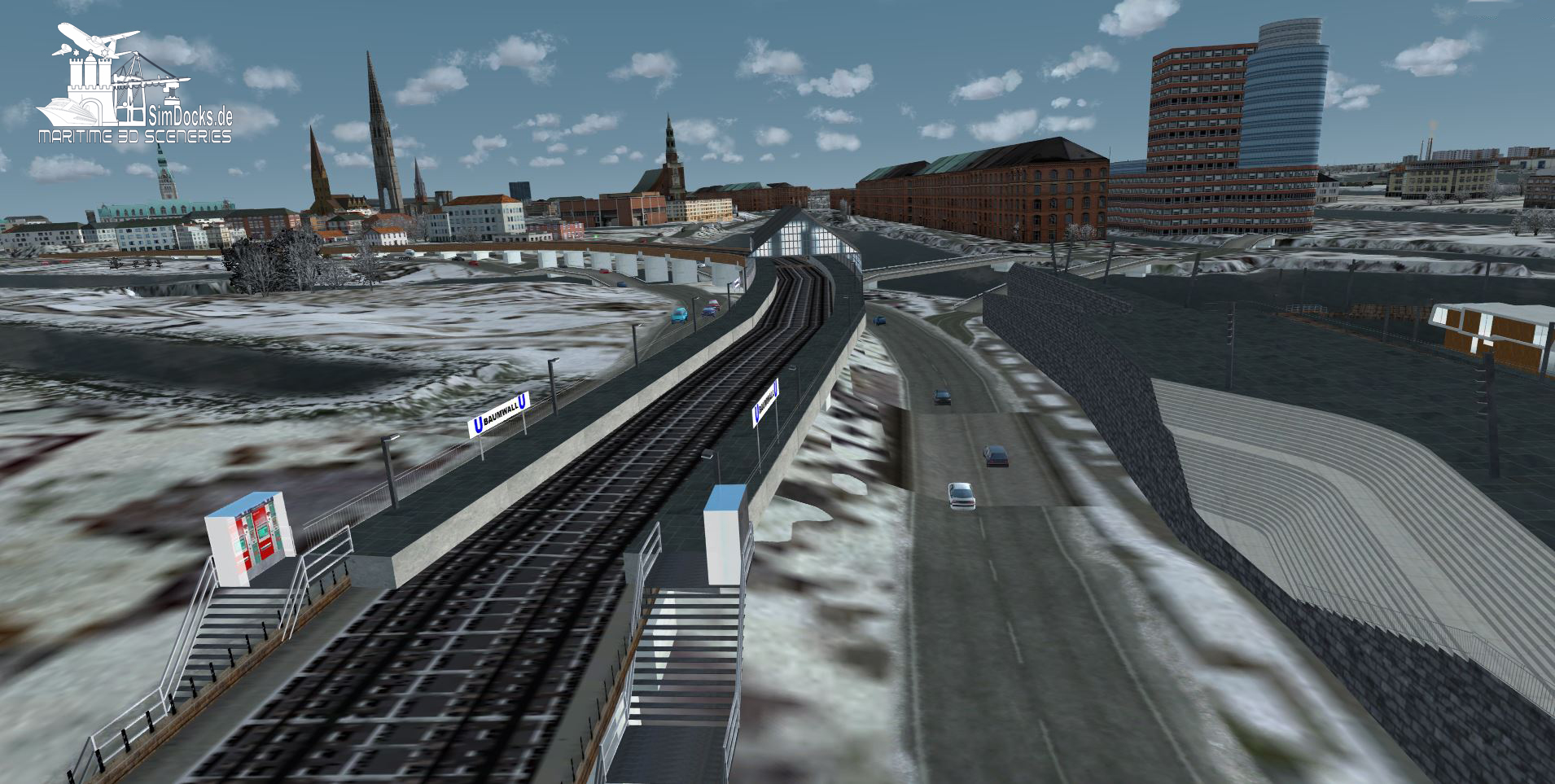 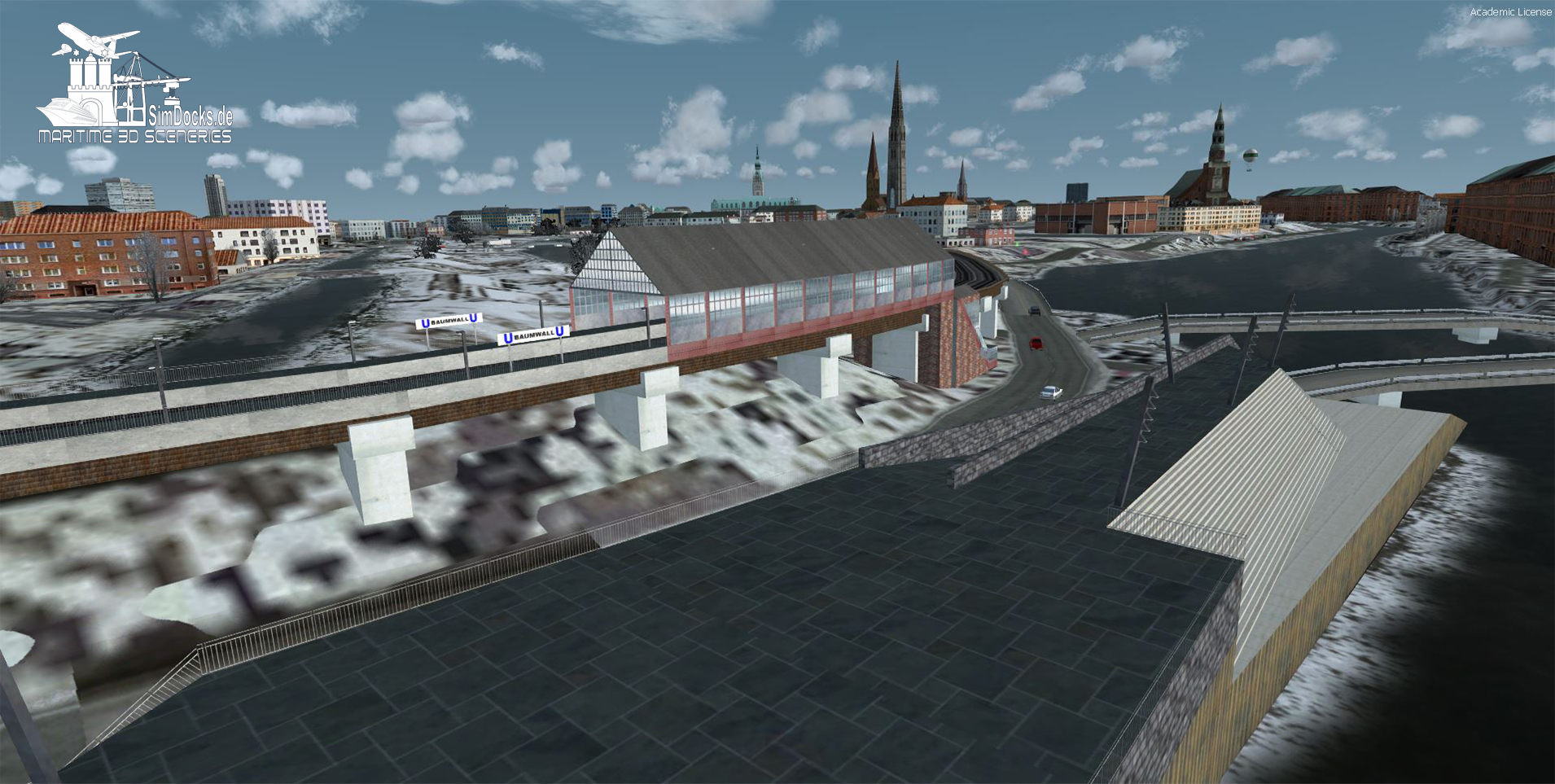 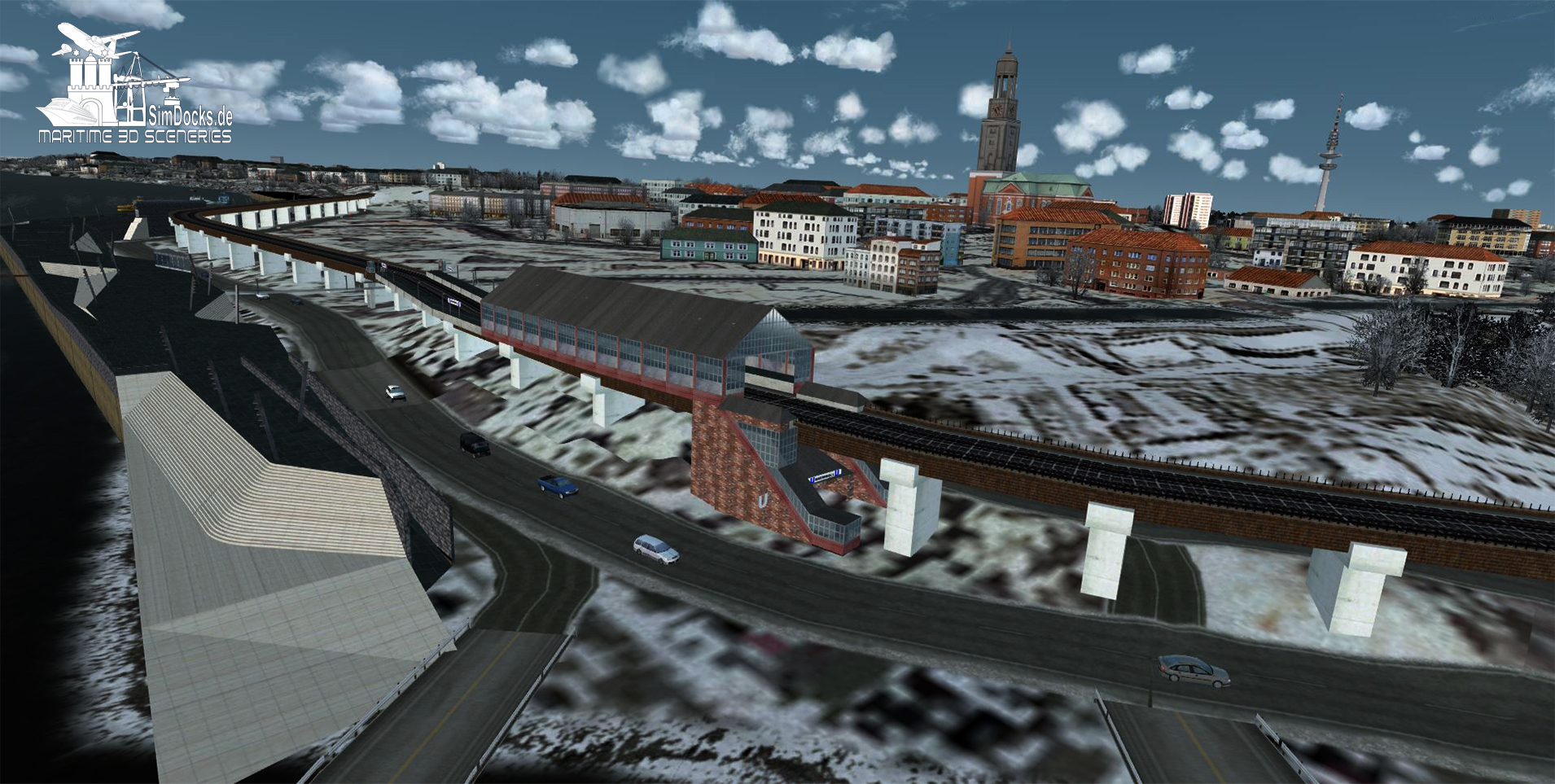 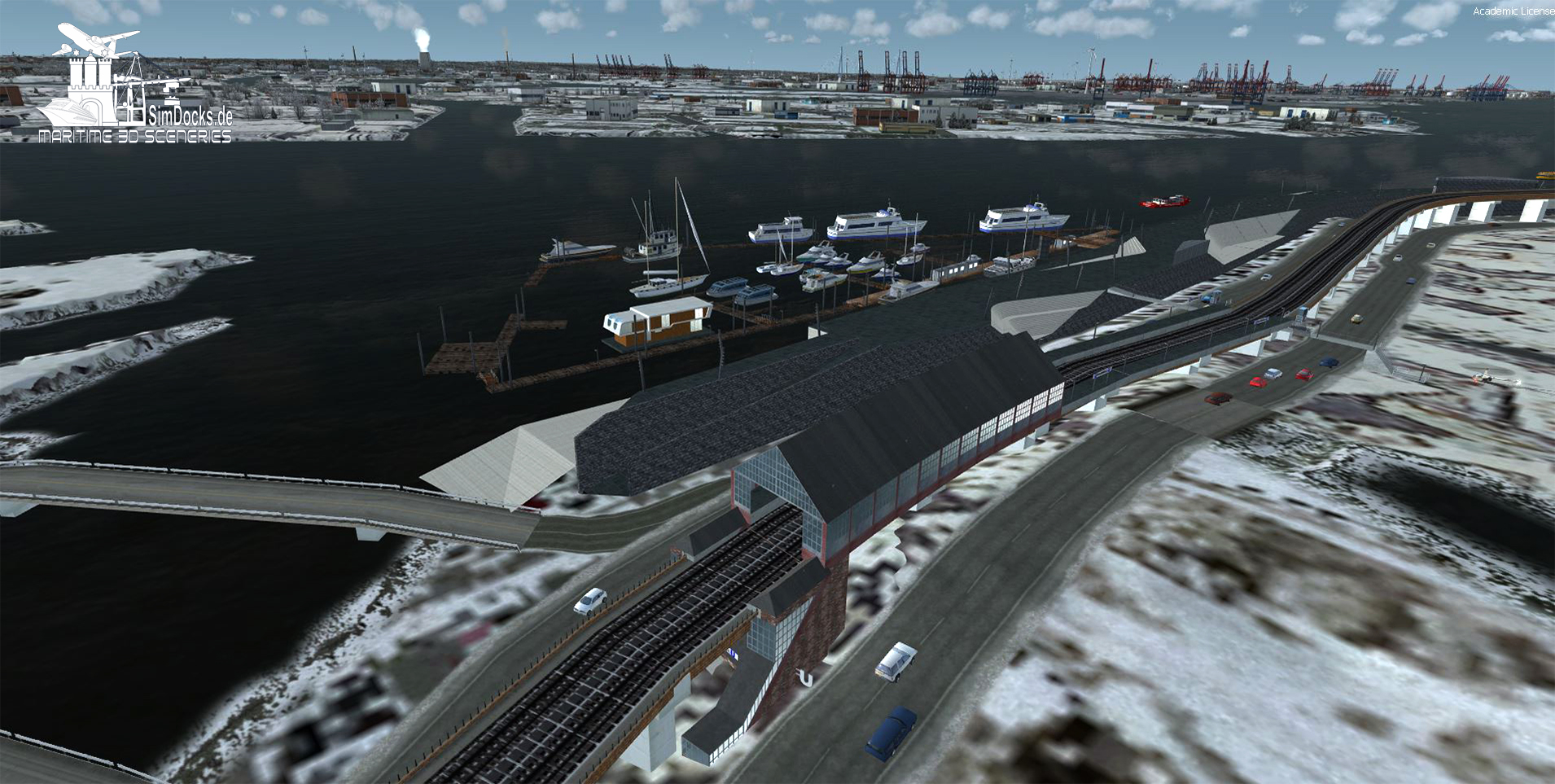 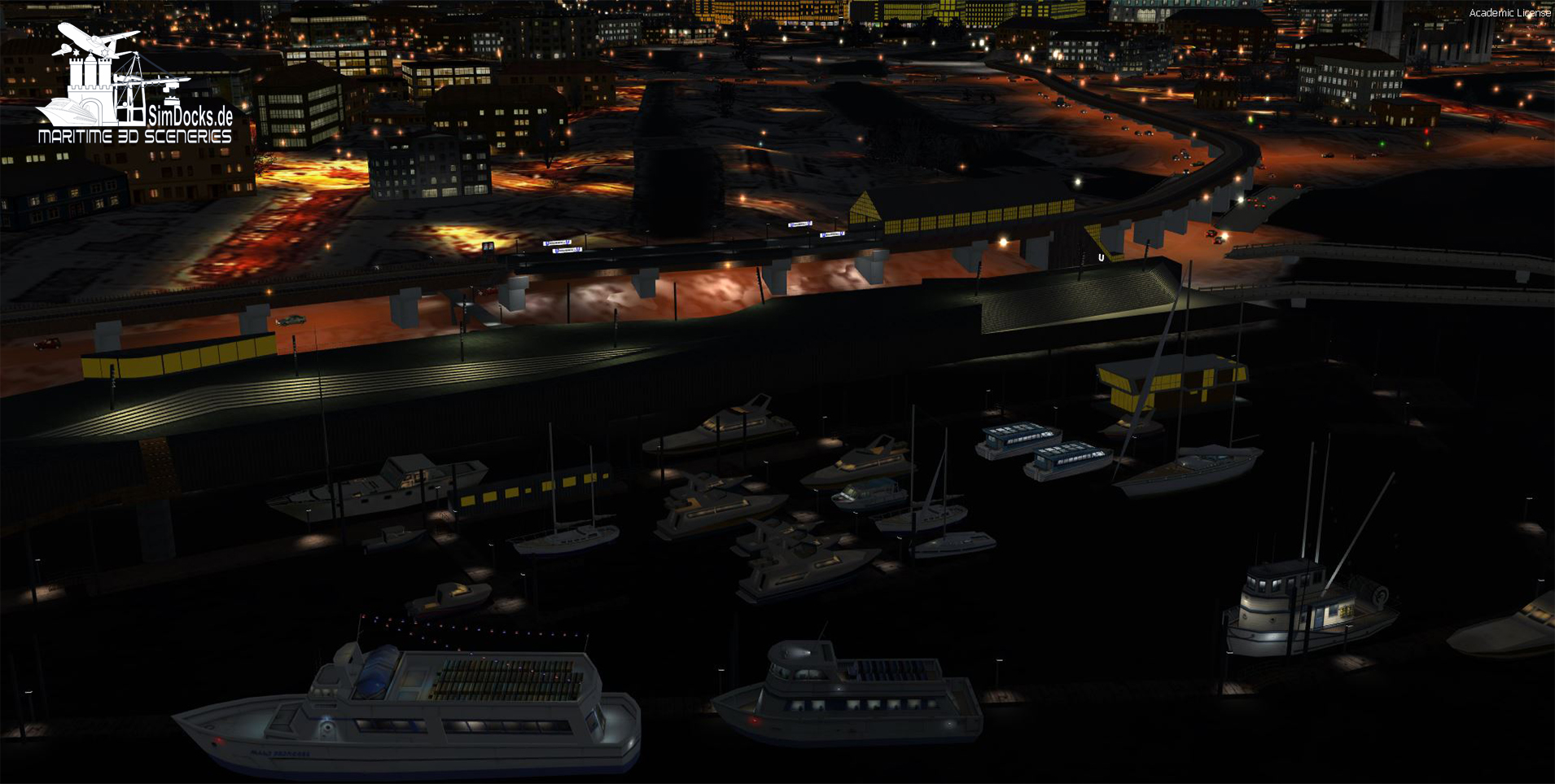 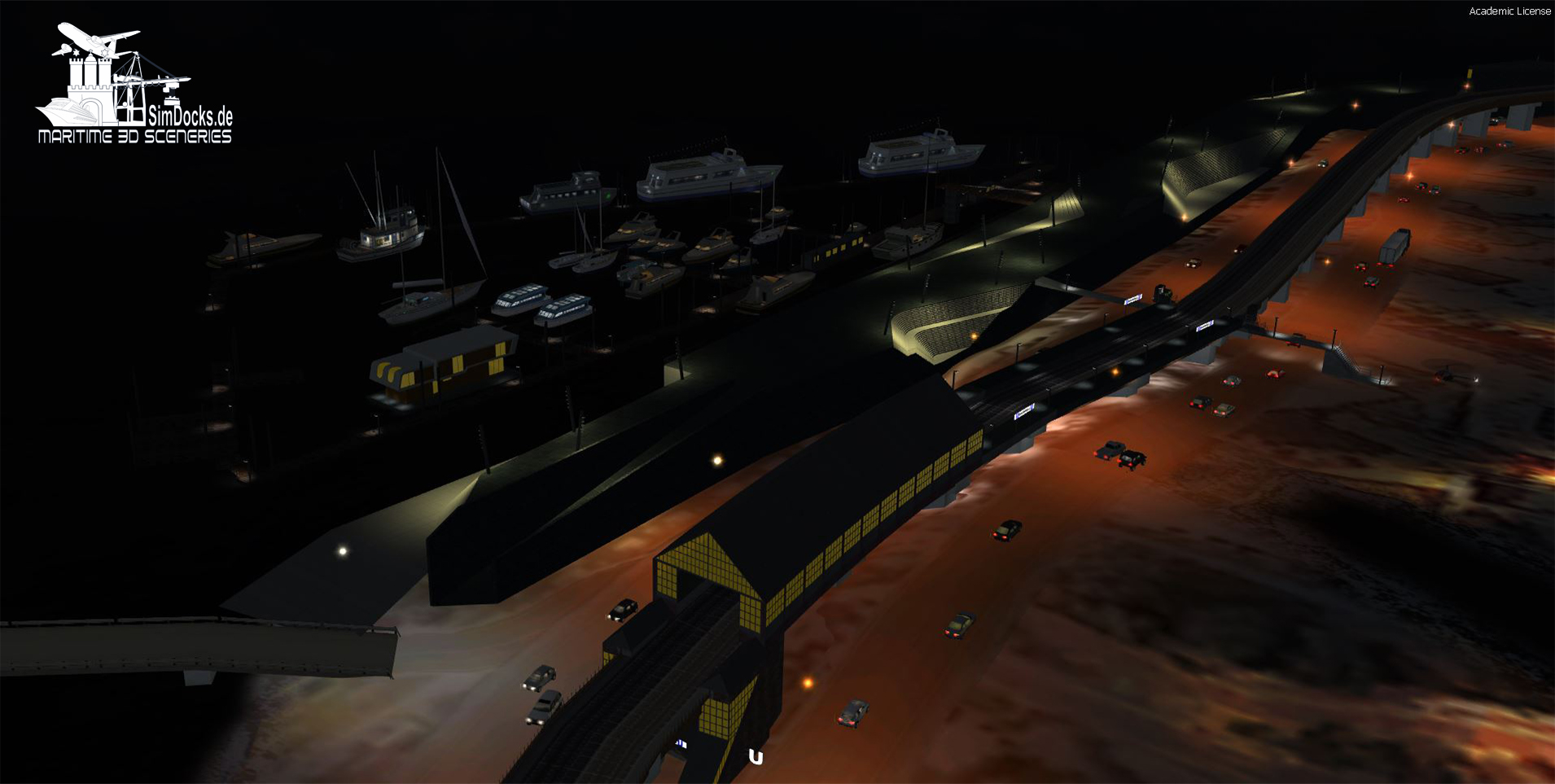 Be sure to leave some dock space as parking spots for your AI boats!

Haha, yes, I'll remember that!
Especially since with the scenery also some ships are added, which have to moor somewhere. It will be narrow in the harbour

And again the port of Hamburg is two steps further.
The historical police station at the "Niederbaumbrücke" - known by the TV series "Hafenkante" - has now found its place. Of course with the corresponding jetty for the police boat "Bürgermeister Weichmann".

Yes, and the second step is the Elb-Philharmonie.
The "Phili" as it is briefly called, I had actually not at all on the plan, since it is contained in ORBX GEN.

However, the Philharmonie in GEN is not illuminated at night, so you only get to see a dark block. Of course that's not possible, because especially in the darkness the building shines in all its splendour. That's why I included them in the project and built them anew - now with dynamic reflections in the many glass panes by day (depending on the position of the sun) and of course with lighting for the night.

The first construction phase of the Port of Hamburg, from the Elbphilharmonie to the beginning of the "Landungsbrücken" (Landing bridges), has been completed with the "Überseebrücke" (Oversea bridge) and the pontoons connected to it (the missing ships come at the very end) and is entering the first test phase.

Now the second construction phase begins, which includes the complete landing bridges up to the old Elbe tunnel.

Here are two more pictures from the area of the "Überseebrücke":

After the new promenade and the "Überseebrücke" (Oversea bridge) are finished, I went to the old buildings of the "Landungsbrücken" (Landing bridges) in the last 2 weeks.

Here I can present you the first screenshots of the Landungsbrücken from the P3D4.

Next pictures will follow when the actual landing bridges - the pontoons - are finished.

Of course the "Hard Rock Cafe" should not be missing!

...and here now two more pictures in the dark

The second construction phase has now also been completed.

But since pictures say more than 1000 words, here are some screen shots:

Unfortunately, for professional reasons, I have had little time in the last few weeks to continue designing the port. Therefore the 3rd construction phase is not as far as I would have liked it to be.
But there are a few things that are worth reporting.

First, the quay walls were extended almost to the fish auction hall and the pontoon with the offices of the tug companies were added.

Much more important, as it is a distinctive feature of the port, are the docks 10 and 11 of Blohm+Voss. Dock 10 has also been docked with a general overhaul ship, some of which is protected against bad weather by a scaffold and tarpaulin.
This ship can be faded in and out in the finished scenery via the configurator, so that the dock can be occupied or empty.

I hope that I will have more time in the coming weeks to push the construction of the scenery.

Hello, mike november,
I am happy that you like my work as a hamburger. It shows nevertheless that the recognition value can not be quite soooo bad

The Beach Club is followed by the caravan and truck park and the large area of the "Hamburg fish market", which takes place every Sunday morning from 05:00 to 10:00 a.m..
This is also the place from which cars that have been drunk off again and again have to be towed away during floods

The service pontoon of the HADAG harbour ferries is located about two thirds of the way between the Beach Club and the fish auction hall (which is now an event hall).
Between the pontoon and the shore, is the submarine museum with the old Soviet submarine "U434", which can also be visited. But walking through the boat is not for people who have problems with narrow rooms.

At the end of the 3rd construction phase there is the fish auction hall and in front of it the pontoons of the harbour ferry dock "Altona".

The house on the left side is already part of the 4th construction phase which has already begun. This then reaches from the fish auction hall to the "Dockland" area.

Hello, Sergio,
thank you very much! I'm glad you like it.

Construction stage 4 in the making!

Here now after 2 weeks the first pictures of the 4th construction stage, the beginning of the "Große Elbstraße" after the "Fischauktionshalle" (Fish auction hall). These buildings need a little more time to build, because they are architecturally a little bit less demanding than simple squares

In this view you can already see the next object in the shell (to adapt it to ORBX GEN and the rest of the scene). This is the so-called "Crystal Tower" (because the facade consists mainly of glass) and the adjacent office building in which the Burda publishing house also has its rooms.

If you now let your eyes glide over the scenery that was finished so far, then I have to say: "Yes, so slowly "my home port" is recognizable

Not that anyone believes the project of the Hamburg harbour has fallen asleep. After a few months break - I wanted to build ships instead of buildings again - the project is now going on.

So today the museum and event ship "Cap San Diego" has taken its berth at the Überseebrücke. Here now also the pictures:

So, once again it is time to report on the progress of the port of Hamburg.

In the meantime, after almost 1.5 years of work, the scenery has grown up to the museum harbour "Övelgönne" and has thus reached its end point on the north bank. Every building on the stretch between the Elbe Philharmonic Hall and the museum harbour has been reconstructed as true to the original as possible. So even non-Hamburgers will be able to recognise the harbour at first glance.

Here are a few pictures of the last stretch from the "Kreuzfahrt-Terminal Altona" to Ovelgönne from the P3D V5 Hotfix.

First the overview from the "Kreuzfahrt-Terminal Altona" to Ovelgönne (you can recognize the high-rise building that is the retirement home "Augustinum" - only for "rich" seniors).

Now here are a few pictures of the individual sections:

On the next picture you can see the whole route from Augustium (in the foreground) to Elbphilharmonie (far back in the background).

But there is also a new highlight in the scenery!
In the middle of this year, Blohm+Voss' Dock 10 should become another "eye-catcher" in the harbour. For this purpose, it should get a complete roof until next year. Neiiiin, not just any roof, but a transparent one, which will be made of textile and transparent foil. The design for this is by the renowned "Architekturbüro Werner Sobek" .

I was a little bit faster than reality and built the dock according to the design (or rather built it in front of it????? ) and inserted it into the scenery. Here are two pictures:

Now a few words about the south bank of the harbour. Unfortunately, I won't be able to implement the south shore into the scenery, because the performance of the simulator in V5 with all addons like EDDH, EDHI, the Alster scenery, GEN, and now the harbour scenery reaches its limits. It's no use to have a complete harbor scenery if it's no longer flyable.
Therefore I will refrain from an extension of the south shore.

Nevertheless there is still a lot to do on the scenery. An adequate ship traffic has to be implemented and then a lot of other small things. Maybe there will be one or the other object on the south shore if it turns out to be crucial for the scenery.

Cheers Manfred
Last edited: 9 May 2020
You must log in or register to reply here.
Share:
Email Link
Top