worked this afternoon on attaching spotlight effects to my main hangar at RAF Brüggen. Everything went fine, all effects and spotlights were attached like they used to be.
But after I exported the hangar model and placed it inside the P3Dv4, no effects were visible.
So I opened MCX and imported the hangar model again but noticed: Inside the "Attached Object Editor" menue the "Effects" section suddenly has gone! I only see "General" with its attach point information, but no spotlights and I can't edit "effects" anymore.... 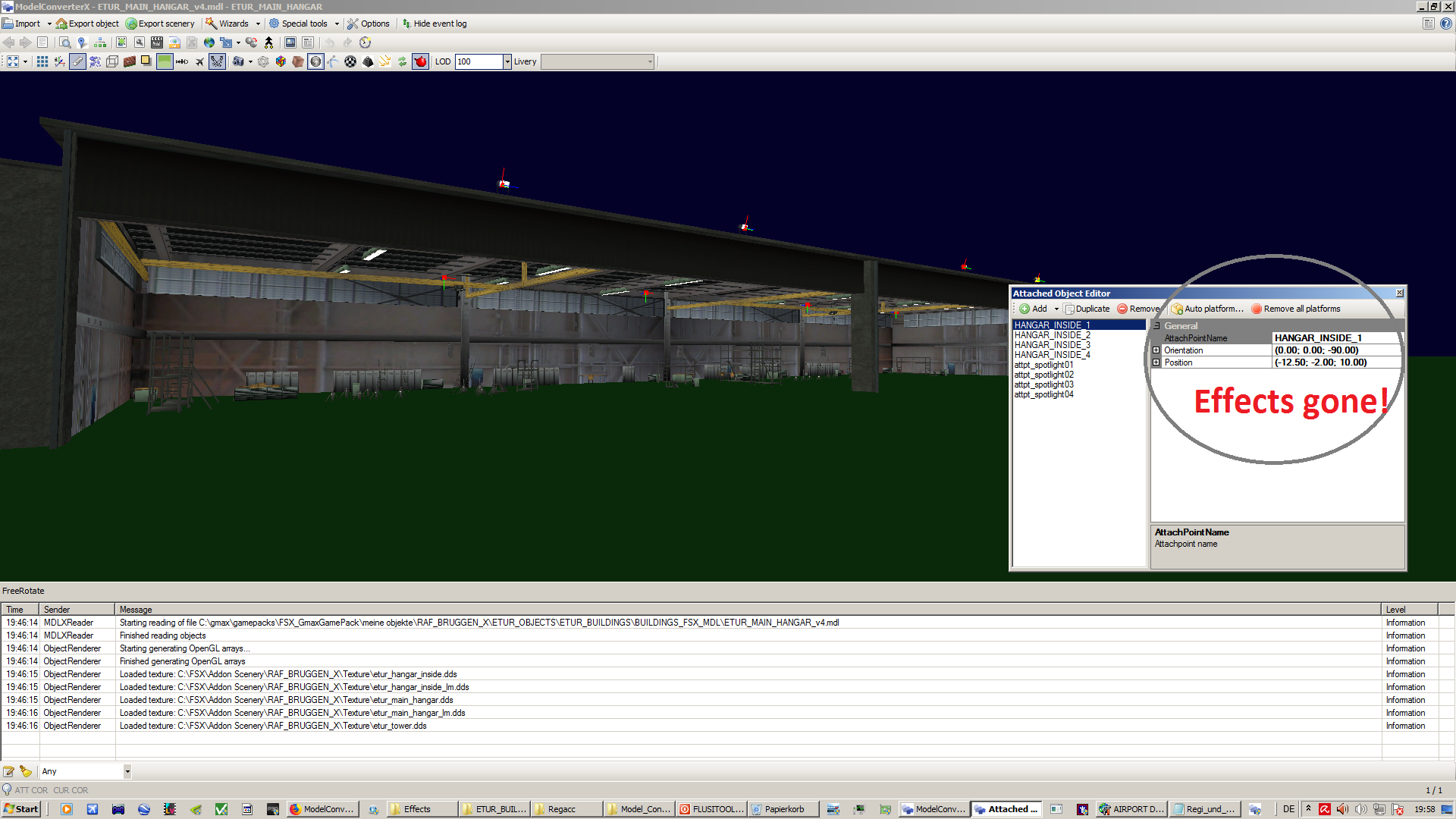 In "options" I tried to set "replace effects by lights" but none of the settings - true/false - show up my spotlights again....
I only have the axial dummies without any effects shown on it. As you can see, "show spotlights" is ticked. Where did I loose control please?
Last edited: 1 Sep 2019

Okay, I have to add this found thread containing the same issue:
https://www.fsdeveloper.com/forum/threads/dynamic-lighting.441768/page-2

I have no idea how to get back my added spotlights so far...

Did the spot light effects get generated when you exported?

It seems at the bottom of the list you have 4 effects.

thank you for answer!
Meanwhile, I noticed some more pieces of the puzzle:

1. For the floodlights on the main apron, I used the same technique and (as I recall it...) the same steps to get my floodlights work fine. And when I reimport them into MCX, I found my "effects" section correctly to the right of the menu): 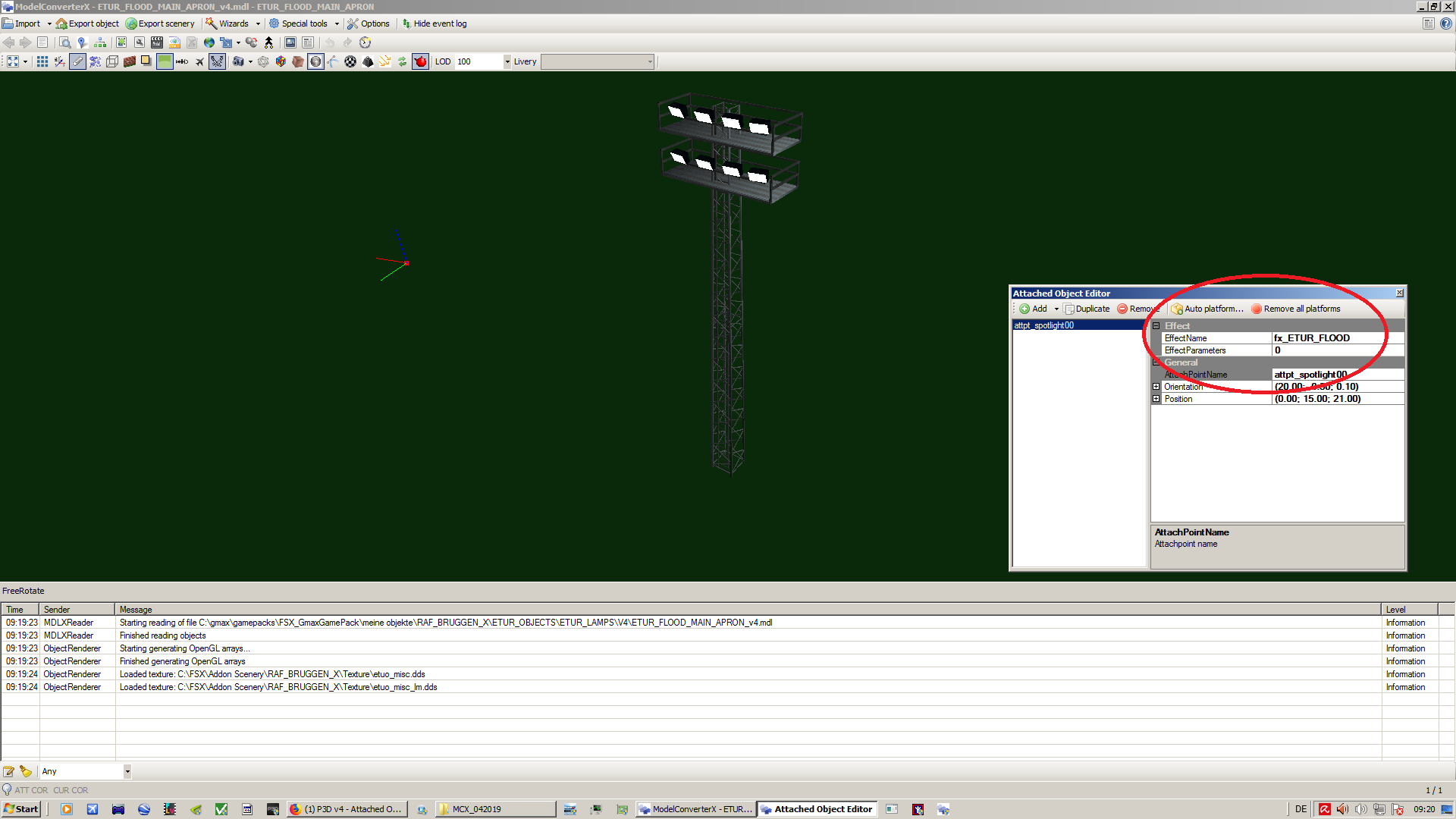 So having a look at the "object information" menu, I can see the effect added to the attach points: 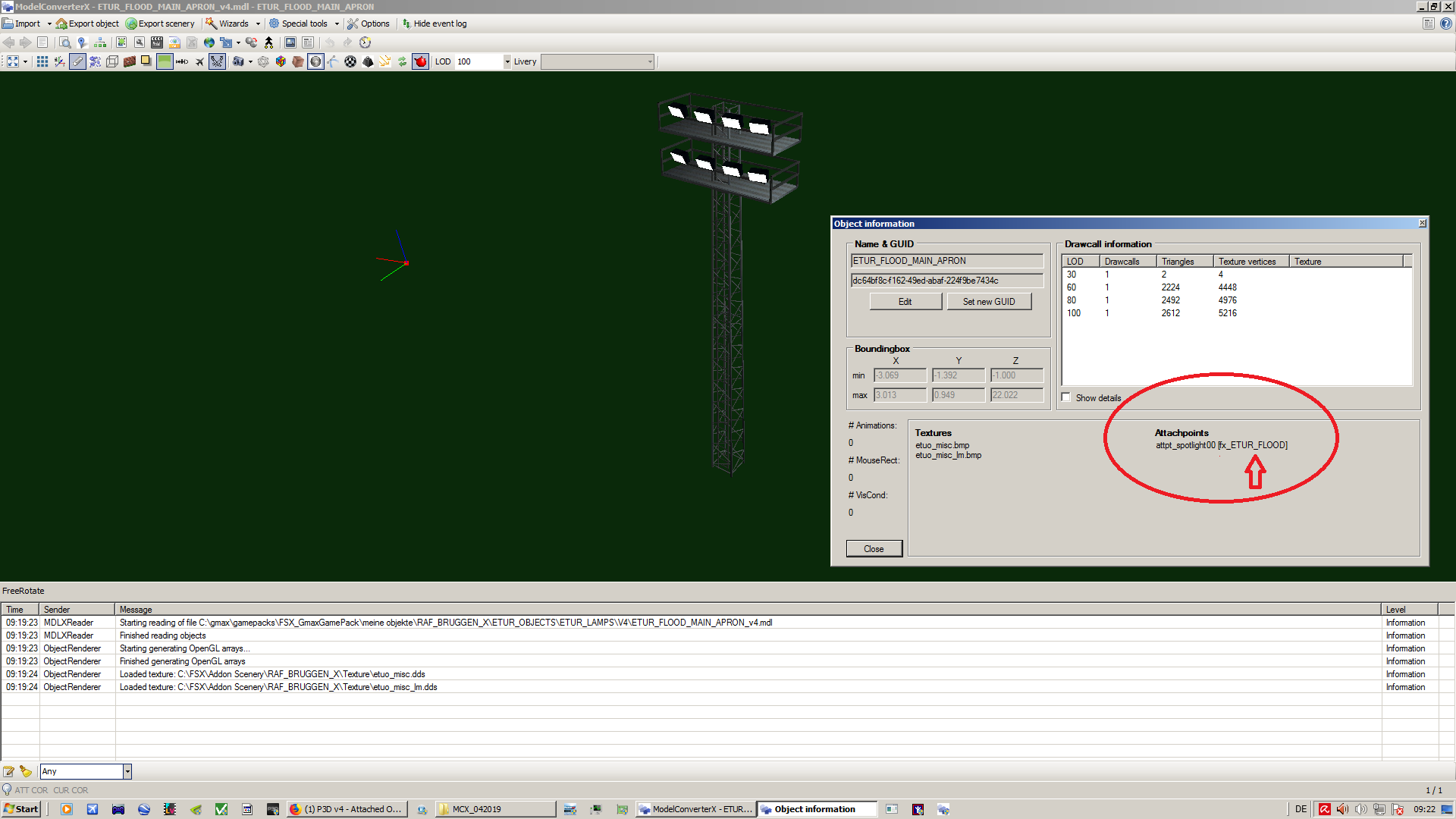 2. Now the bad part of my issue - it seems to be there are no effects added, although I did insert an effect into the effects section inside the "attached object editor". 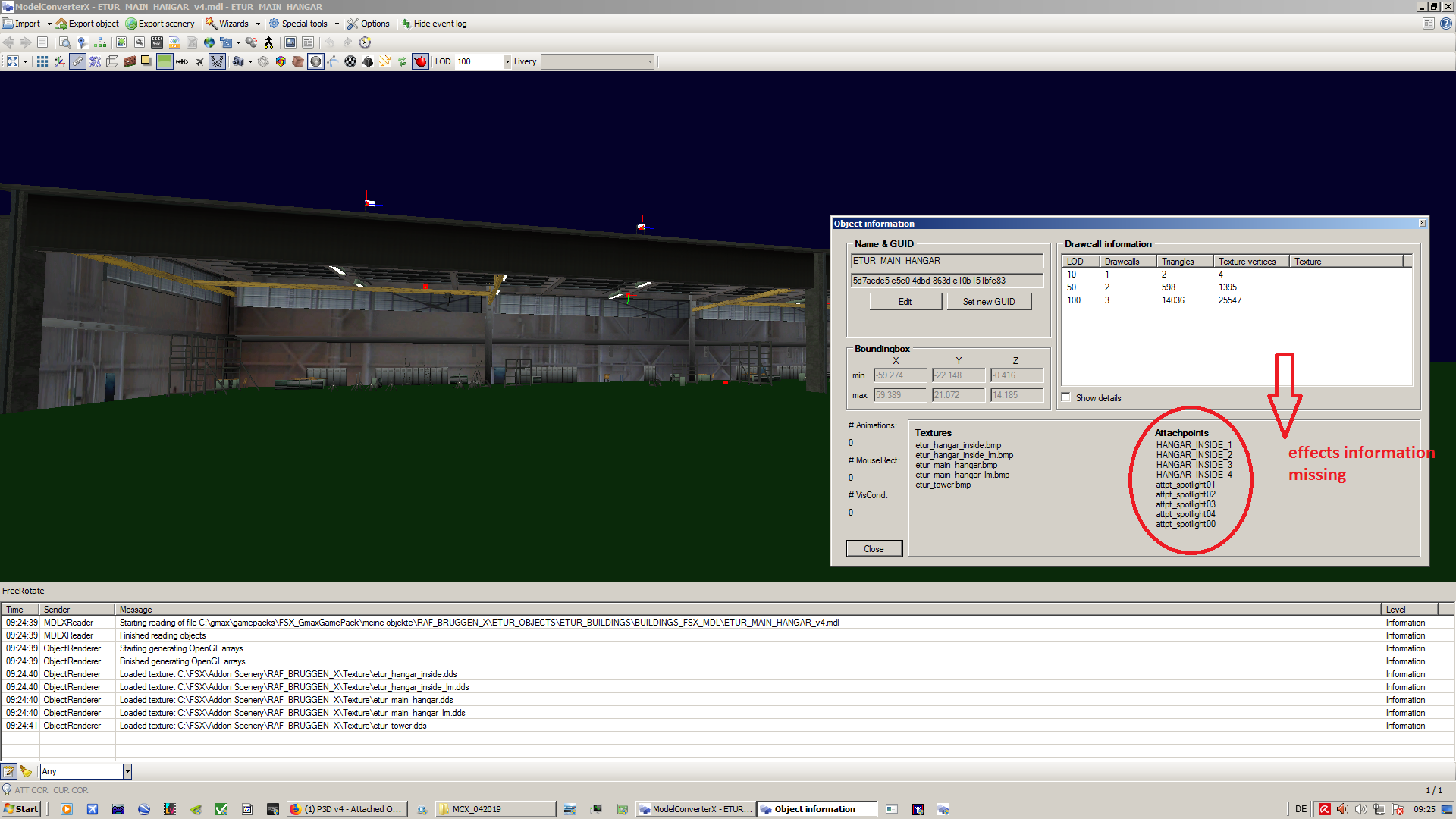 That's really strange, because I repeat all steps for several times without success. Is there any setting issue maybe? Here the "export" section of the MCX options menu: 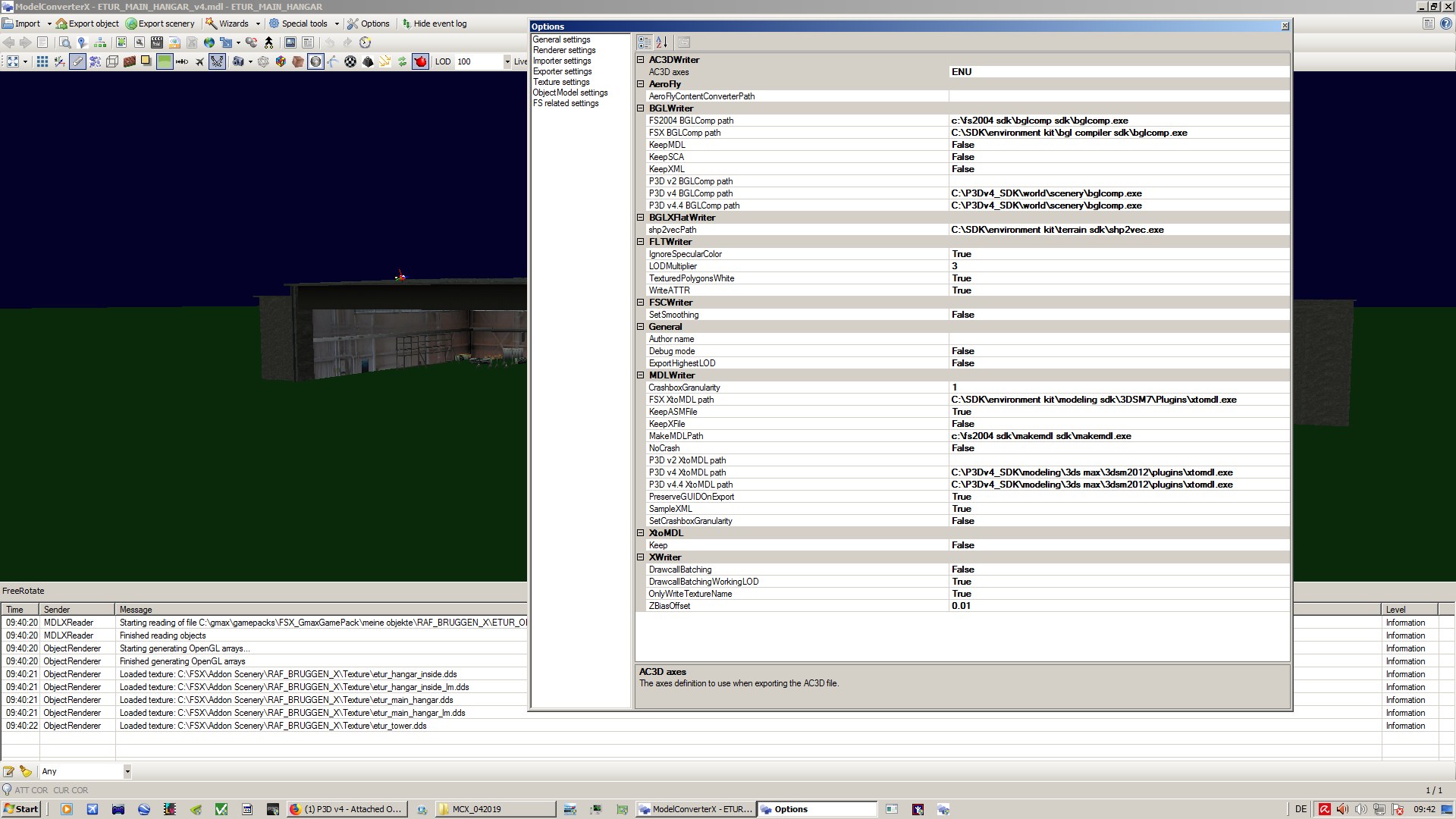 Staff member
FSDevConf team
Resource contributor
Did you export to a P3D v4 MDL file? Else the spotlights are not exported.

Yes, I did. Most irritating part to me is to see the no effects added behind the listed attach points in the "object information" window - and at my working floodlights the effect is shown (as you can see in the red circle/arrow section of my shots...). Thus I think I did some wrong settings somewhere....But where?

Staff member
FSDevConf team
Resource contributor
It looks like the effects did not export, which is weird.

Weird indeed, that costs a lot of valuable lifetime. Mostly, it seems I have lots of slack joints in my programmes

I bet you anything that in a few days, it suddenly works without having change anything....

Staff member
FSDevConf team
Resource contributor
I'll see if I can reproduce something here, but that might be hard. What is the name you used for the attachpoint and effect?

Thanks for your effort, Arno.

The naming of the attachpoints you can find in #4, second last shot to the right inside the red circle.
First of all, when I did start the "attached object editor", I set the effects name option from "default" to "user named". (After getting trouble I also tried to use the default effects naming, but it also failed...)
The editor confirmed it by using the effects name furtheron called "fx_ETUR_SPOTS". (After getting trouble I also tried to use the name "fx_ETUR_SPOTS_fx", but it also failed....)
Everything went fine, even if I duplicate the spotlights. The preview of the spotlights worked great. That way, I added all needed spotlights to the front roof of the hangar (named "attpt_spotlight01 to 04", #1 screenshot...) Done, satisfied.
After this, I decided to also attach some lights inside the hangar but did not see the attached effects before. Untroubled just because I felt save seeing the attachpoint symbols at the hangars front side, I attached the new spotlights inside the hagar. At that point I noticed that the effects section inside the "attached object editor" has gone (#1, screenshot to the right...) Only now I did a view inside the "object information" and noticed that there are no effects listed behind the attachpoint listing....

Finally, I had an intently look at the MCX options settings, but did not find any solution. It is really strange, just because I can reimport my floodlights WITH still existing "effects" section (#4, first and second shot).
I will give it another try from the scratch next weekend or will change to the newest version - maybe this will solve my problem....

Staff member
FSDevConf team
Resource contributor
Are you sure you didn't make a dummy attachpoint by accident instead of an effect or spotlight? The dummy only had a name.

Okay, got it! (as always by calling myself an idiot...)

My fault was to import the Hangar as FSX model (its been used for the FSX version of the RAF Brüggen scenery as well...).

Arno, thank you for your patience and effort! Appreciate this very much that you always offer your help! 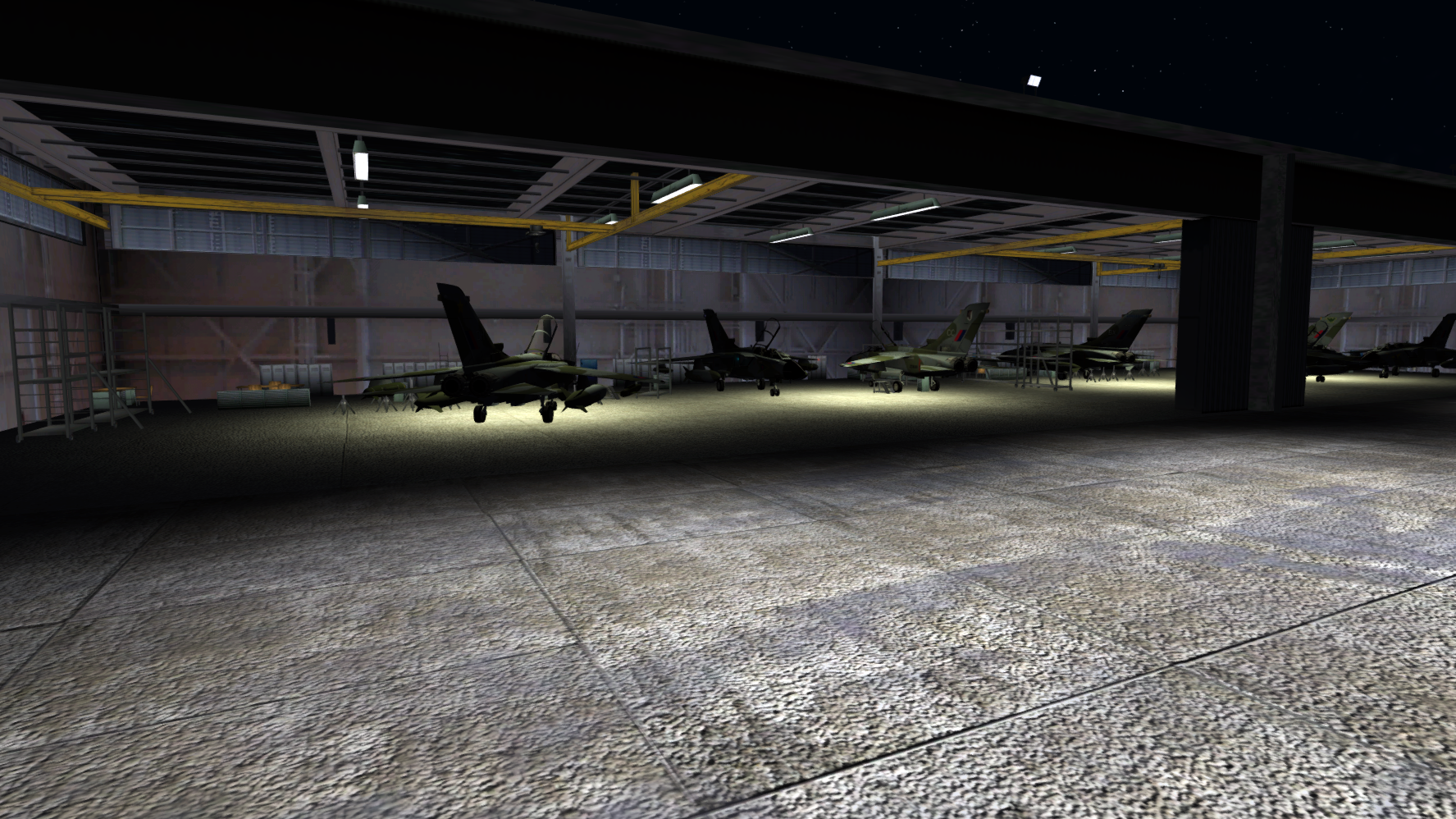 It looks great, Manfred. All your screenshots always do!

From mobile hence short
You must log in or register to reply here.
Share:
Email Link
Top