Notwithstanding my enjoyment of the wind-powered HMS Bounty, I have been using FSX as an engine-powered ship simulator too, but I keep having the same problem. I cannot get the watercraft to go into "reverse." I know the FSX models are all "aircraft," but there are designs and tweaks which allow mimicking other vehicle types.

Here are the things I have tried and the results.
One possible idea was to add an extra engine but face it 180-degrees so the thrust would push the watercraft in reverse. Can this be (easily?) done? Can the SHIFT+P "Pushback" be made to work on any vehicle?

Thanks for the help.

First I don't know a right answer but I think a wind-powered vehicle can't reverse as an motor powered vehicle. You also can't reverse an unpowered slider.
You are right there are some other problems with no "real aircrafts" in FSX. AFAIK eg. can't two sailships make way if they come opposite together so as MS can in FSX.
C

For clarity, I am only wanting a “reverse gear” for powered boats and ships.

[off topic]
As far as the Bounty, it is quite easy to reverse via “tacking.” Essentially, a square-rigger can’t “come about” (turn into the wind) since it will lose way before it can head across the wind. However, if the Captain or Mate calls for a “tack,” the helmsman will steer hard over into the wind as much as possible. Once all headway is lost, the helm and the yards (sail support members) will be reversed to a position against the wind which will push the ship backwards. As the ship moves backwards the helm is reversed and the yards are adjusted to keep the wind directly into the sails. Once the ship is at greater than a 50 degree angle to the wind the the helm is centered and sails are reversed again to allow the ship to proceed normally.
There is another technique called, “wearing” or “wearing ship,” but I can expound on that another time since this is longer than I expected.

Sorry for misunderstanding. I found this:
It is from a post ex 2015 on this forum (search for ships reverse)
Hi,
The last three weeks I have been concentrating on creating a reverse thrust for ships with a piston engine. There are many very nice freeware pilotable ships available for FSX, but they nearly all lack a reverse thrust. I had several conversations with Michel Paquet who has published on these forums his quest to create his own ship from scratch. I am very grateful to him that he shared very openly his experiences with me. This + all other things I've been reading through, lead me to the conclusion that Flight dynamics editing is often done on a trial and error base.
So i wanted to find out if, for the reverse thrust, there was'nt a universal method that could be applied.
Therefore first a small theoretical framework, but as simple as possible (my excuses to people who know much more about this and who'll say that I am oversimplifying):
A piston engine in FSX delivers forces that make a shaft turn in 1 direction only (clockwise). That movement can not be reversed (i.e. anti clockwise). So reverse thrust does not come from the engine.
On the shaft sits the propellor.
There are 2 kinds of propellors.
A fixed gear propellor that can not create a reverse thrust,
and a constant speed propellor that can.
Why? Because it can feather. This is what happens when you feather a propellor:

So it can create a reverse thrust, because it can change the angle of attack of the blades in the air or in the water.
Back to FSX:
It is actually rather simple to create a reverse thrust for a ship.
You go to the aircraft CFG file, look for the propeller section and see that you set the following parameters:
propeller_type= 0
beta_max= 65
beta_min= 15
min_gov_rpm= 500
prop_feathering_available= 1
prop_auto_feathering_available= 1
min_rpm_for_feather= 500
beta_feather= -65
prop_reverse_available= 1
minimum_on_ground_beta= 1
minimum_reverse_beta= -14
The rpm values may somewhat vary and the beta values (feather angles) are not absolute either. But I am pretty sure that the reverse beta must be a negative value.
And maybe a propeller with 4 blades works better for a boat, but I don't know for sure.
How do you make this work when piloting?
Pushing first F1 and then F2 will not work.
There is a command Cntr+F2, that is often misunderstood. In most literature it says that it reduces the RPM. But in Microsoft literature I found that it actually decreases the propellor beta (angle of attack of the blades), which means that it is the feathering command.
So if you are piloting a ship and want to reverse:
Push F1 first, keep Cntr+F2 down for some seconds, give throttle again and you'll be in reverse.
To return to normal thrust: again push F1, then Cntr+F4 for some seconds and give throttle again.
Voilà, problem #1 of the pilotable shipping solved.
Up to the next one: improving the autopilot tracking...
Cheers
Marcel
C

my apologies for sounding curt. It was not my intention. I have edited my reply post to be more cordial and informative.

Thank you for the comprehensive explanation. I noticed all the aircraft.cfg on marine vessels all’s engines specify “jet engines.” Is this of any concern?

The good news is the steps you mentioned can be encapsulated in a couple push button macros.

Hi Calvin, there is no need for apologizing.
But now you misunderstand me = Christian.
In my mind I thought I have read sometimes something in the direction of reversing vessels.
I searched and found the post of Marcel and copied it for you.
By the way I never tried to verify Marcels way for reversing engines - it is too complicated for me

Good luck for you
C

Okay Christian. Thanks for the correction. If I am able to effect Marcel’s function successfully I will advise.

codetrucker said:
For clarity, I am only wanting a “reverse gear” for powered boats and ships.

[off topic]
As far as the Bounty, it is quite easy to reverse via “tacking.”
[/off topic]
Click to expand...

If you are using simulated winds for motive force, then falling off the wind, is less reversing, than it is travelling downwind faster, than it is beating to weather and it could be understood as drag, overcoming lift.

I do not know if sail lift is actually generated, in the sim, or if you are simply pushed by the simulated wind, this makes a difference. If lift is generated, then you would find it more expedient to gybe off, as speed is maintained, speed equals lift and life equals...more speed.
Tacking is something you can do in a harbor, or narrow channel, imo, it either works, or it doesn't. Many a time I've found myself "in irons."
C

The Bounty is a brilliant piece of kit and all techniques used in real life can be simulated very well. I’m not sure how the developers did it, but it works. Sometimes it can even produce a Suspension of Disbelief and I could swear I can “feel” the wind! Amazing!
C

@rk, have you ever tried the simulated HMS Bounty? You sound like a mariner.

I moved where I live now, for the wind and I used to work in the trade of designing and retailing windsurfing sails. I have a friend who got his sail kite caught on one of the masts of a square rigger. You can see the pirates in the rigging, sabers in teeth, trying to figure out how to slice him off! 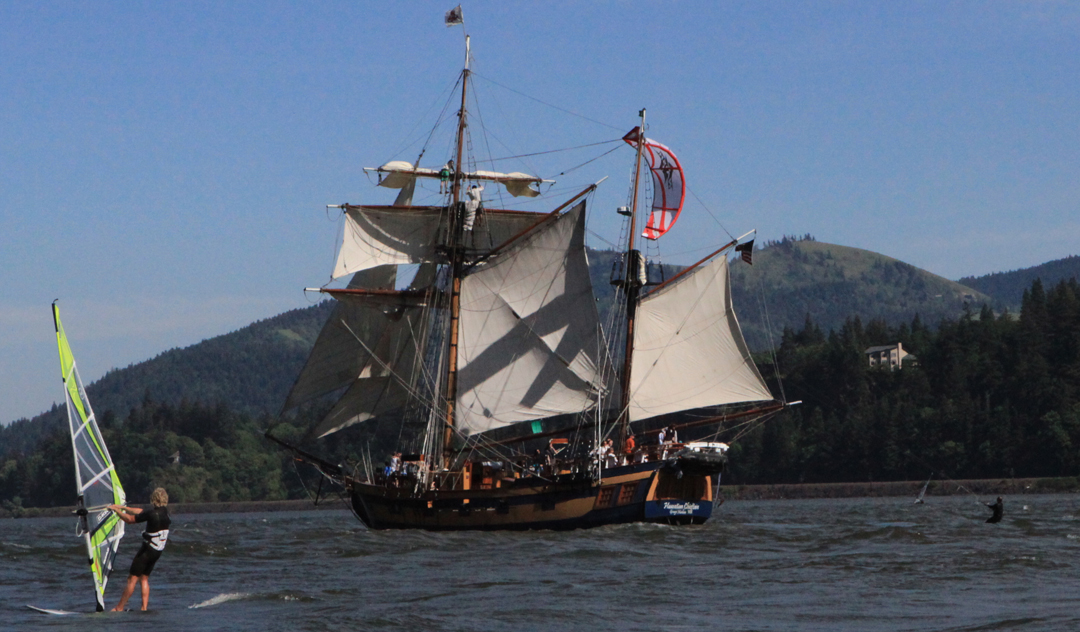 Only two masts. It only looks like more, because the ketch rig is on the same mast as the square sails.

Hawaiian Chieftain is a 103-foot square-rigged topsail ketch owned and operated by Grays Harbor Historical Seaport. Built in Lahaina, Hawaii in 1988, she is a contemporary interpretation of a traditional design based on the European trading vessels that called in Hawaii during the 18th-century...

codetrucker said:
The Bounty is a brilliant piece of kit and all techniques used in real life can be simulated very well. I’m not sure how the developers did it, but it works. ....
Click to expand...

The principle of coding this wind-driven 'FDE' is pretty simple: calculate and overwrite (via SimConnect) the longitudinal/lateral speed and bankangle of the ship, based on actual wind-speed and relative wind-direction.

The trick is in making/coding these calculations a bit realistic, because these speeds (as in real-life) also depends on the mass of the ship, deployed sail surface, mast-angle, drag (in the water), and a few things more.
That's what I tried to simulate for the Bounty (and simularly for Miltons' HMS Victory model).