Not sure if this is me or the aircraft VC (Carenada Senaca V) has this gauge and just trying to replicate it. Pretty sure its me so not sure is TURBINE INLET TEMPERATURE, FAHRENHEIT is correct wording.
I am sure the wording is wrong but I also placed the default mooney .GAU file on there and that wasn't registering anything so not sure,

Also watch out for the "less than" symbol, when parsed in xml it gets designated as a start of a tag and will cause the gauge to fail.
A "greater than" symbol works though.. To keep things simple it is better to use the literals -

XML:
FYI - The example you gave here does not parse when copied into a clean xml document.
Last edited: 25 Jul 2019

I think that this might be the problem ,
(A:General eng1 TURBINE INLET TEMPERATURE, FAHRENHEIT)
The Senaca V had a Continental reciprocating piston engine , not a turbine .

My guess is that the instrument that you are after is either a inlet temperature gauge for , Intercooler or , engine intake .
Check your panel photos or operating manual that might point to the gauge source .

Resource contributor
Yeah, nothing with TURBINE is likely to work with a piston engine plane.

Thanks Spoke will give that a try when I get back.

Hi Karol and Tom I might me a bit stupid well a lot stupid when it comes to code but I do know my aircraft and aware that the Seneca is a reciprocating engine
however the TIT gauge does stand for Turbine Inlet Temperatureas it is referring to the spinning turbine wheel of a turbo-charger
Please see below which comes from Seneca V owners website.

and here they are on the aircraft 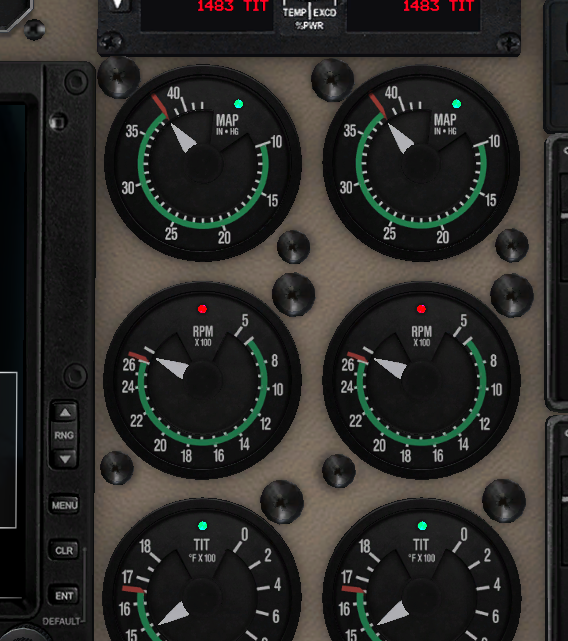 The Seneca V Engine page on the G1000 MFD displays information on individual Cylinder Head Temperatures (CHTs) and Turbine Inlet Temperatures (TITs). Earlier models of the Seneca displayed Exhaust Gas Temperatures (EGTs), but this is not the case on the Seneca V. EGT is the temperature of the gas leaving the engine and TIT is its temperature entering the turbo-charger; whilst they are very similar, they are not quite the same thing.

As an engine burns fuel, it provides power to drive the pistons, but it also produces lots of excess heat that increases the temperature of the cylinder heads. Allowing even a single cylinder head to get too hot can quickly damage an engine, so the Seneca V provides a CHT reading for each individual cylinder, which is a much better engine monitoring system than was available on previous models. There are several ways to manage the CHTs, but although the maximum value (the horizontal red line at item 13 pictured below) for the Seneca V is 460⁰F, the POH advises that it should be maintained below 420⁰F to increase engine life.

By contrast, a high EGT does not indicate that the engine itself is under excessive stress or represent a threat to engine longevity. So the actual value of EGT is unimportant to the engine, it simply indicates that a lot of energy from the fuel is being wasted out of the engine exhaust. A very useful article on monitoring EGT can be read at EGT Myths Debunked.

Resource contributor
Unfortunately neither FSX or P3D will allow TIT to work when a recip engine model is designated.

EDIT: I was wrong with the above. There is an A:var for Recip engine TIT. See Bob's reply in #8.

Resource contributor
TIT only stands for the engine turbine, not the turbo TIT. You would need to "roll your own" for that (i.e. create one from scratch or use a massaged EGT or CHT).

Question for you ... If you load the Bravo and display (A:RECIP ENG1 TURBINE INLET TEMPERATURE,farenheit), it returns values that appear to be driving the Bravo's TIT gauge. And, the values seem reasonable, at least, I guess they do. If not turbine inlet temp, what is that variable simulating?

Resource contributor
Yes, it appears that the RECIP version of the variable is returning what you want - assuming that it gives you reasonable values, not always the case.

Question for you ... If you load the Bravo and display (A:RECIP ENG1 TURBINE INLET TEMPERATURE,farenheit),
Click to expand...

You are quite correct Bob. Somehow I've never noticed that A:var over all these years!

Thanks to everyones help and input

Thanks Roman worked a treat although had to add an extra 500 on to it to match the Victuals gauge although I figured that "they" would have to massage to gauge as no tooltip appeared over it but did on all other gauges learnt
that from this builder.

and promise to not use <> symbols anmore
Last edited: 29 Jul 2019
You must log in or register to reply here.
Share:
Email Link
Top