What do others do! Stick with it or change - on going airport development

I suppose I started scenery development like many others on here. Looked at a stock FSX airfield near by , thought that's nothing like it and went on to alter it.

A couple of years ago I downloaded a 3rd party version of LCY (London City) and the scenery was sort of okay - until I looked at a Youtube video last year and suddenly realised that the aircraft don't park nose in as in the scenery file but actually turn around on the stand under their own power and park at an angle to the terminal building, ready for an unassisted departure out. After a bit of experimentation I even managed to get the AI aircraft coming in, turning around and parking just so using ADE (still a job in hand as I need to get the ground markings sorted).

Anyway, with the coronavirus and lots of spare time lately I've been playing around with it even more (car parks etc added) but looking at an updated map, suddenly realised that LCY had gained an extra taxiway (D) to the runway. Damn! So over the weekend I added the extra taxiway, also adding the red/white ground runway/taxiway markings, as well as the enhanced runway ahead centre lines etc.

This morning it all got put on hold. I managed to get hold of yet another Google map (even more recent than the one I had last week) of London City airport. Only to find out, via various websites, that LCY is in the middle of a major upgrade with piling going into the dock (latest photo show the piling about half way down the dock), a new taxiway deck is going on top of them so that aircraft will no longer have to backtrack the runway back to the terminal and yet even more aircraft parking areas to be added.

Needless to say I'm gutted. Maybe I should have just stuck with the local airfield - it isn't used that much! LCY is one of my favourite airports to fly into mainly because of the steep 5° glide slope and you have to manually fly the aircraft in.

But what do others do when faced with a major change to a project? Quietly delve away in the background, stay locked in a time vacuum or maybe get out a creative licence on how the airport might look like when its all finished. Or maybe even put it on the back burner as one to be forgotten.

I might add a grateful thanks to all that give helpful advice and hints on here. I'd have been lost without the website but even now, its still a very much try it and see if it works approach..

Why don'y you look at the NATS site? 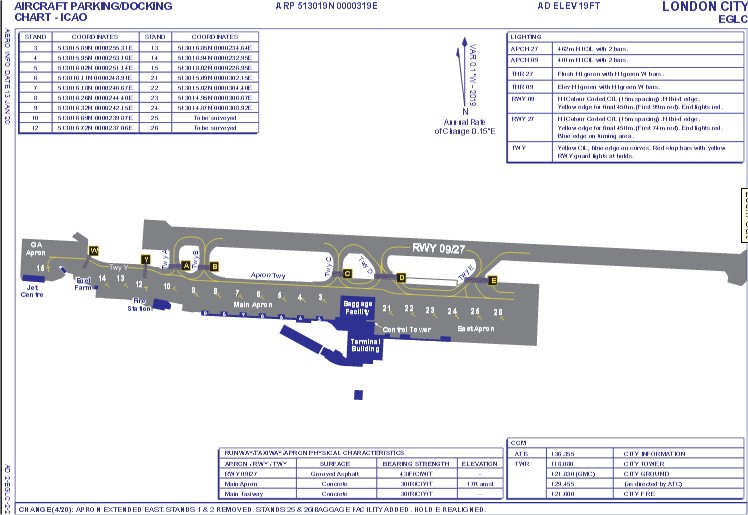 That is how it is more or less as it is at the moment but the layout will supposedly be very different come next year. The NATS chart for instance doesn't show the new taxiway, or is it an access road, already built to the right of taxiway E as on the photo. I already have a fair amount of it looking very much like that already. But interesting it shows only 2 additional stands i.e. 25/26, as there are suppose to be 7 new stands going in - mine goes up to 24 at the moment. It's where and how far along the new taxiway goes, plus the new aircraft parking areas seem to be an unknown, presumably the stands will be east of the existing. Any idea where I might pick up such info without waiting for maps from Google etc? The above doesn't show the surrounding area well either. There are airport car parks etc on the same side as the terminal building but alongside the dock area opposite the runway towards the 27 end. Do like a bit of scenery as I fly in and out. I can feel a lot of additional work again coming up. Maybe ADE should come with a health warning!

Anyway I'll keep an eye open on the Nats site for updates.

Thanks for the info.
You must log in or register to reply here.
Share:
Email Link
Top