Staff member
Resource contributor
Disappointing is too mild a word.

So ..... would the other shoe to drop be FSX:Steam? I would think that if it is not making them any money they would sell their rights to MS flightsim technology.

Resource contributor
Ron, I should think FSX:SE will remain available. After all, it doesn't really cost DTG anything any longer since it's development is frozen now. I honestly believe they should have simply upgraded FSX:SE to 64bits and called it a day.
Last edited: 24 Apr 2018

Resource contributor
I feel that as a very sad news :-(

My hope has always been that the FSW sets itself apart from the competitor and gradually replaces the big competitor. I do not give up hope and hope we hear very good from the Dovetail team.

All the best to the team.

Staff member
FSDevConf team
Resource contributor
Given that their SDK took very long to arrive and once it arrived we only get a half SDK, I guess developers never really took up FSW. While the things like the PBR materials seemed like good additions and improvements to the rendering engine. But without a good (and quickly available SDK) it's hard to get developers on board and without 3rd party community your sim won't be a success.

Resource contributor
I won’t have to avoid commenting on FSW now, I suppose, but it gives me no satisfaction to see a real flightsim development project being canned.

Resource contributor
Arno, I don't always agree with Robert from PMDG, but I do believe he nailed the reasons for DTG's failure to capture developers' attention with their confusing and oftentimes contradictory positions on third-party involvement, just as you have said yourself, albeit in far fewer words...

According to Mr Kok over at Aerosoft, apparently the entire team was released. http://forum.aerosoft.com/index.php?/topic/131951-the-death-of-flight-sim-world/

Resource contributor
Well of course they have, why would they continue to pay their team if they've killed the team's efforts? Boy they are sure getting roasted in the Steam Forum!

n4gix said:
Well of course they have, why would they continue to pay their team if they've killed the team's efforts? Boy they are sure getting roasted in the Steam Forum!
Click to expand...

I would have thought that many of their skills might be transferable to other ongoing efforts like Trainsim world...... Modeling, physics, textures, lighting, coding....
Last edited: 24 Apr 2018

I am surprised by this news, since FSW appeared to me, going into the right direction as a follow-up for Microsoft FSX.(-SE)
Great graphics, big names for 3rd party development and suddenly poef... into thin air
This announcement makes me wonder about a couple of other things like:
- What is the real reason behind this FSW departure?
- Where will the FSW developers move to next?
- Will there be another party who takes over from DTG and contineu to develop FSW into maturity?
- Will DTG continue to support FSX-SE? or will they also pull out of the flight-simulation completely?
- Will there (ever) be a FSW-SDK be published, so the FSW-community can continue to support / expand it
(like what has happened Microprose famouse Falcon 4.0 into Falcon BMS)
- How about all 3rd party add-on developers who have put their money on FSW? 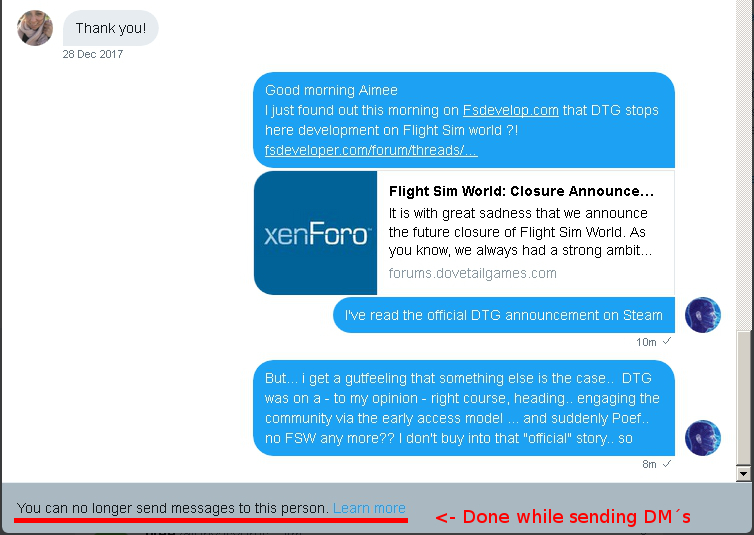 and this is what happen, instant Twitter block while sending DM's to Aimee.

Q: Has anyone else heard some more in-depth news via DTG FSW 3rd partners?

Resource contributor
She's probably gutted that the project she had been working on for years is shut down, and that she's just lost her job. No wonder that showing up implying that a hidden agenda explains the demise of DTG is too much for her.

Resource contributor
Not to defend Robert's position, but DTG themselves were very ambiguous with their initial statements regarding 3rd-party participation. That history is still preserved at AVSIM in their forum postings. Their original statements did in fact imply that all sales would have to be made via the Steam platform. My own initial contacts corroborate this position as I was being told that ~60% of the sales price would be divided up between Steam and DTG, with the remaining ~40% being remitted to our company on a quarterly basis.

It was only about nine months later that this position was softened when DTG began insisting that there was no requirement that 3rd party sales had to be exclusively available via the Steam channel, but could also be sold via the developer's existing sales channels. That was a significant change in policy, but still not good enough in my considered opinion. About seven months later, their position changed yet again with the requirement for the Steam portal being abandoned, and it was now apparently okay for anyone to sell for the FSW platform through their own existing outlets. I found it difficult to maintain trust any company who's position changed according to the direction the wind was blowing.

At this juncture I'd not yet seen the numbers of active users DTG had forecast, so I pretty much lost immediate interest in developing, especially so since the (partial) SDK had yet to be released. It was pretty much impossible to develop for FSW without the tools, so I adopted a wait and see attitude. Nonetheless, I did experiment with trying to get our C310R Redux Edition into FSW with limited success absent the SDK, but was not terribly impressed. I am hugely disappointed at the apparent failure of the management of DTG, and in no way cast any blame whatever on the passionate and dedicated development team they'd assembled. I do hope that they all find gainful employment elsewhere soon, especially where their talents are better appreciated!

Ronald said:
I have a little blue bird telling me that their is something else then the official story going on at DTG
So I decided to ask my questions to Aimee Sangeralt (DTG community manager) directly...
Click to expand...

Shoot that little blue bird. I think your speculative question to someone who's just lost her job would be as welcome as bird poop.

n4gix said:
I am hugely disappointed at the apparent failure of the management of DTG
Click to expand...

Think Dilbert and his Pointy Haired Boss (PHB)?
You must log in or register to reply here.
Share:
Email Link
Top